Sam's asked us all to participate in this Utensibility Meme, which will ultimately turn out in a round-up compiling all of the things you could just NEVER EVER be without in your kitchen. Whether your favorite thing is a money-is-no-object object or an itty-bitty cheap-as-dirt thing, it has to be on the list! Here's what I for one, wouldn't want to be without: 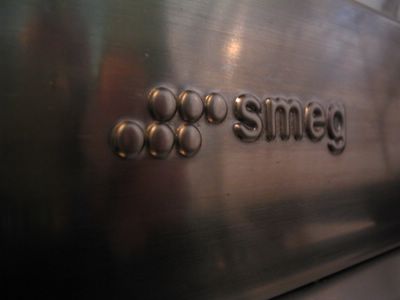 I love it, and well, obviously, use it on an almost everyday basis. 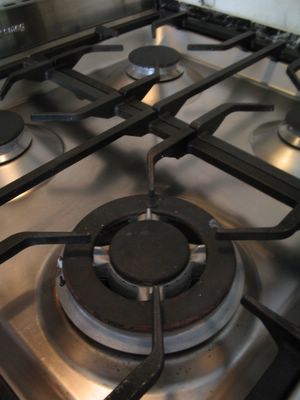 A lot of the buildings in Copenhagen have gas laid in, but alas, not ours. So we have a great big portable gas "tank", you know, the ones people use for camping stoves, standing in one corner of the kitchen. Pretty stubborn, eih? I thought my boyfriend was a bit wacko when he insisted we got a gas stove, but boy am I glad he did! There's just nothing like cooking on gas - the heat is so much easier to control, it's fast and efficient. Okay, so you have that greasy film EVERYWHERE, and seeing it's a steel stove, you do need to give it a wipe-down everytime you've used it, or it just looks disgusting. But it's all worth it. 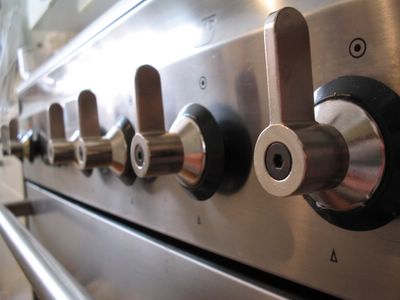 The combination with the electrical oven (convection-mode, too!) is perfect. I had a gas oven in my last apartment and continuously got bread that was doughy on one side and burned on the other - argh! This one works a charm. And I do like using that oven of mine...

Price? I dunno. But it's not the least expensive on the block, I'm sure...

The little less expensive (and in some cases it will probably fall above the $25 limit, but ours didn't!) is this one: 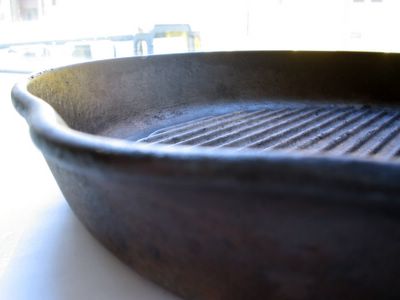 My grill pan. Or, actually, this isn't mine, but my boyfriends - but you know, mi casa es su casa and all that. We have no garden, so the closest I get to that smoky, charred flavor is this.

Ours is actually a rather cheap one, bought at the supermarket. No brand names here - I did once buy a Le Creuset grill pan, now languishing on a top shelf somewhere (or did it go to the basement storage already?) that just didn't work (Seems they do have some nice ones around now though - but less than $25? I'm afraid not...)

But you see, the price is not that important - what you have to pay attention to when buying one of these is, in my opinion, not it's name, but it's qualities. It's got to be a heavy bastard, cast iron, preferably, That way you can heat it, heat it, and heat it some more, and it won't start breaking on you. As for the ridges - oh dear, the ridges! Small and pointy, spaced about 0,8-1 mm apart. Please, please don't get the ones with rounded ridges (as the Le Creuset did) - half of the pleasure of grilling food is that nice grill pattern you get, and if the ridges are to thick or too close (or too far apart) you'll just get one great big brown mass)

ALWAYS heat it until smoking when you want to use it. Never wash with soap. Never put oil directly on it, but brush the food item with a little oil (or if it's well seasoned, you don't even need the oil for vegetables) Every once in a while, cover the surface with a nice thick layer of salt, put it on the heat and wait till you hear the salt starting to crackle - this cleans the pan as much as I could wish.

Use it for asparagus - for grilled aubergines in a salad, or to go with hummus or falafel - grilled fennel on top of a creamy risotto - grilled scallops, makes the loveliest pattern! - grilled bread for bruschetta, adding that smokiness you just won't have it you make it in the oven - you add to the list. Important thing is, if you don't already have one, I urge you to buy it. If my apartment caught fire, this would surely be one of the things I'd rescue. Hmm, or maybe I wouldn't have to - it could probably survive the fire. But I just can't carry my stove, can I?;-)
Email Post
Labels: Me. Meme. MeMe. Me

Sam said…
Hi Zarah Maria.
Thank you for taking part. I am so jealous of your oven, especially as we have the oldest, crappiest electric oven imagineable in our rented appartment. Lovely pictures too!
If only I could buy one of those with my voucher!

It's funny - this event is reminding me over and over again of all theutensils I used to have when I lived in the UK. I didn't ship out most of my stuff, so I had to rebuild my kitchen again, sowly over the years, whilst many other of my things lie unused and unloved in my mum's attick. Shipping abroad is just so expensive. My Le Creuset grill pan is one of those things that never made it over here with me.

Thank you for taking part 0 I hope to have the round up completed by the end of next week.

Anonymous said…
Hi Zarah - I just made my utensibility post and realised that you had a smeg cooker too! They are great, aren't they? We didn't have gas either when we moved in and got fixed just for the cooker, it was worth it. I love the biggest hob for stir-fry, I've used it as a 'heater' once, but the gas man said it was illegal!
Monday, July 04, 2005 6:37:00 PM

Zarah Maria said…
Clare - I can't imagine what I'd do without a stove that worked properly... or a broken griddle pan. Oh wait - I'd buy a new one ASAP!!;-)

Sam - you're very welcome - I had fun doing it! At first, I couldn't be bothered with the stove (I admit, I had to clean it first, so it took some self-convincing!) Now I can't stop thinking about things I could have posted about too! My electric water kettle for instance, wouldn't want to live without that either... And don't get me started on rebuilding a kitchen?! Very mixed feelings on that one - I mean, if you had all the money in the world it might be quite cool, but you still couldn't get all that stuff that has just grown with you - like your pestle and mortar, or the well seasoned pan, or, or... Fill in the blanks! Must be hard! Can't wait to see the round-up!

Sylvie - I'd had gone for knives too, if it wasn't because I'd already seen a couple of posts on knives, even on the brand I have (Global) But you know, one can never have too many knives! (I know, professionals might beg to differ!)