I inagurated the roasting tin: what better to make than CINNAMON BUNS! And cinnamon buns for the extra lesson our fantastic teacher in immunology had offered to give us just before our exam, just to make sure we had things down right. When we'd finished the "real" lessons", he brought cake (almost like Julie does!), so me and one of the other students decided we had to do something for this last lesson. 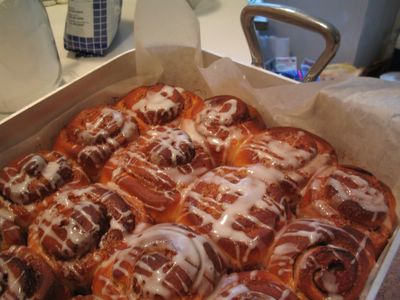 People sorta hated did not like me for having the time to make cinnamon buns (courtesy of Nigella, again - they really are the best in my opinion) In reality, I used it as an excuse to not ponder my books too much at the last minute. It only confuses me more - you know, you get to the point where there's just no more room in your brain, eh? And it surely didn't stop anyone from eating them either!

Oh yes - and I just KNOW the sugar from these was what made sure I PASSED this exam too! YAY ME!!

Nigella's Cinnamon Buns from How to be a Domestic Goddess, with some minor adaptations

For the filling:
150 g soft, unsalted butter
150 g sugar
1 ½ teaspoons cinnamon
(I usually make 1½ portion of this - the original recipe instructs you to use one third of the dough as a bottom layer, but I always skip that step and just make more buns - so I need the extra filling... Well, that, and I like them gooey!)

Icing sugar, for when the buns are cooled, if you are so inclined.

Combine the flour, sugar, salt and yeast in a large bowl. Melt the butter and whisk it into the milk and eggs, then stir it into the flour mixture. Mix to combine and then knead the dough either by hand or using the dough hook of a food mixer until its smooth and springy. Form into a ball, place in an oiled bowl, cover with clingfilm and leave it to rise for about 25 minutes (Or double the time if you're using half amount of yeast) I've also been told you can succesfully do this step in your breadmachine (I've never tried that personally, 'cause I don't have one)

Mix the filling ingredients in a small bowl.

Preheat the oven to 220C (Gas 8). Roll out the dough on a lightly floured surface, aiming to get a rectangle of roughly 50 x 25 cm. Spread the rectangle with the buttery cinnamon mixture. Try to get an even coverage on the whole of the dough. Roll it up from the longest side until you have a giant sausage.
Cut the roll into 3 cm slices which should make about 20 rounds. Sit the rounds in lines in the tin, swirly cut-side up. Don't worry if they don’t fit snugly together as they will swell and become puffy when they prove. Let them rise again for about 15 minutes to let them get duly puffy (or, again, for about 30 minutes if using half yeast)

Put in the hot oven and bake for 20 – 25 minutes, by which time the buns will have risen and will be golden-brown in colour.

I usually make this batch, but only bake about 4 or 6 and freeze the rest, un-baked. If you want to do this, then after you've cut up the assembled buns (before the second rise), you put them on a cutting board or some other flat item, stick them in the freezer and leave them there for a couple of hours. When they're frozen solid, transfer to plastic bags, for easier storage. Then, whenever you feel like a freshly baked cinnamon bun, pop a couple out of the bag, leave to defrost and rise at the same time in the pan you'll be baking them in (takes an hour, hour and a half depending on how warm your kitchen is), and bake as per usual instructions. Really not the worst thing you could have lying in your freezer, and for some reason, they're never there for that long.
Email Post
Labels: Me. Meme. MeMe. Me

Anonymous said…
The buns look lovely! Grats for passing the exam, it was surely thanks to the sugar :-) The roasting tin is really really great!
Monday, July 04, 2005 1:55:00 PM

Stephanie said…
Congrats! How much longer do you have?

Cathy, I dunno - I think the roasting tin might feel insulted if I put anything less inviting than cinnamon buns in it... don't you?;-)

Stephanie - oh dear, way too long I'm afraid! 3½ years, if everything goes according to plan... but there might be some interruptions here and there, I have some things I'd like to do before I settle down completely, so you know... 5? 10? Ah, who's counting!:-) I've put up the recipe now, and my instructions for making them into a sorta bake-off product - so now there's no excuse to not have them around all the time, heh!
Tuesday, July 05, 2005 1:20:00 AM

Niki said…
Congrats!
It's so amazing you made these; I've been wanting to do it since getting that book (and the Schneken recipe on the next page...oooh!), but just haven't got arouund to it. Only yesterday I made a list of the things I want to bake, and that was in the top 3!
I had the feeling they had to be served warm, which is one of the reasons I haven't done it yet. But I'm assuming from yours that it isn't the case?
Tuesday, July 05, 2005 1:48:00 AM

Ana said…
Sinful Cinnamon Buns, as one company calls them over here, and those are very sinful looking indeed!
Tuesday, July 05, 2005 3:31:00 AM

tanvi said…
i've always eyed that recipe but have never made them- would you believe ive never had a cinnamon bun? your picture looks so good though, i might just have to give it a try. congrats on passing the exam!
Tuesday, July 05, 2005 4:17:00 AM

Zarah Maria said…
Hi Niki! Thanks! Oh, the schneckens - they're gorgeous too! And regarding the warm/not warm issue - I wouldn't want to serve them straight out of the oven, but a good hour, hour and a half after, maybe even more. They are at their peak a couple of hours after being baked, but next day, they do go a little dry. I had someone suggesting using them for french toast when they've gone stale. Or use the freezer tip, that way it's not that hard to only have freshly baked cinnamon buns, and not boringly stale ones....

Hi Ana! Sinful indeed - and I'm not even ashamed of it!

Hi Tanvi! You have to try them! And really, there's nothing not to like about these! Butter, sugar, cinnamon - huh??

Stephanie said…
Thank you, thank you!

A little math (I never remember the conversions...), and I hope to make these during the next few days.

Hey, no rush; absolutely do all those things you want. I got pregnant just a few months after our wedding. Suddenly? Every thing changed.
So, have fun. Try things. Believe me!
Tuesday, July 05, 2005 6:39:00 PM

Pille said…
Really-really lovely looking cinnamon buns - plump and filling! I've made these couple of times, interchanging these with a Swedish cardamom & cinnamon bun recipe that I have had for ages (Nigella claims these to be Norwegian, doesn't she?) - and both of them taste pretty much the same as my granny's Estonian cinnamon buns:) I love them most quite hot with a cold glass of milk - heaven on a cold winter night! - but warm and cold are also very nice (I like how the sugary-buttery cinnamon filling becomes slightly crunchy by the following day - that is if you've been generous with the filling).
And I totally agree with you about not wanting to waste 1/3 of the dough, so I make extra buns as well.
Friday, July 08, 2005 12:50:00 PM