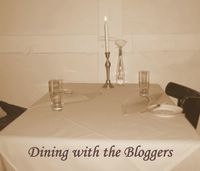 A little confusion this week, my apologies for posting too late - I thought the theme was Indian this week, and it turned out - it wasn't! Nah, healthy/low fat/light it was, so be sure to check out what Cathy's tried. I stuck to what I'd already done, and I'm not sure I can totally justify calling this low fat... Healthy maybe? Yes, we could call it healthy!:-)

A couple of months ago, Barbara of Tigers & Strawberries had a post up, titled One Potato, Two potato, Red potato, Blue potato. Blue Potato? I got blue potatoes once in my organic drop-off box, but I hadn't seen them anywhere else - well yes, in Jamie Oliver's cookbooks, but not in the hands of REAL people, you know. Barbara had included a recipe for the prettiest looking Saag Aloo I've ever seen. Admittedly, I've never seen Saag Aloo before, but it really is gorgeous! Unfortunately, I hadn't seen blue potatoes this winter at all, so I grieved for a while, but bookmarked the recipe thinking I could always just try it with regular potatoes.

I love the scene in Bridget Jones' Diary where she cooks soup using some sort of blue string - the soup ends up all blue, and when it's served, one of her friends go: "well, there is just way too little blue food out there anyways!"

Really, there is. And come on - could YOU resist these? 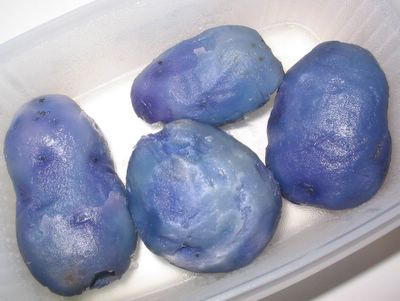 Actually, go have a look at Barbara's picture - her's look purple, which mine did too, before I cooked them.

Imagine my joy then, when a couple of weeks after bookmarking the recipe, the organic box had the last of this years crop of blue potatoes tucked snugly in between crunchy parsnips and cabbage!

And the saag aloo, well, that was divine. Lots and lots of different spices - nothing better than cracking out all those dusty jars - I know, I know, I shouldn't have them waiting around in jars, but they have to be stored somewhere! It's heavenly scented, creamy (but that's because of yoghurt, not cream) and filling - c'mon, humor me - it's healthy!

And it's hard to keep your eyes of it... Now I don't usually post pictures for DwtB, but I really had to show you this: 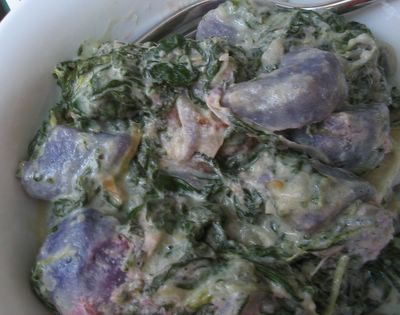 Ain't it PRETTY? A little creamy looking, compared to Barbara's - I used a Greek yoghurt, 'cause that's what I had handy, and substituted vegetable oil for the ghee. Other than that, I followed her instructions to the letter... I suppose I was a bit liberal with the yoghurt too... So I like creamy, ok?;-)

Next week, the last of Dining with the Bloggers before summer...
Email Post
Labels: Delicious Dinners DwB

Anonymous said…
Hi Zarah Maria,
those look absolutely stunning! I wanted to try them for ages, but either wasn't in the mood for some experimenting or didn't find them, when I had them on my list. How would you describe their taste compared to "normal" potatoes? Any striking difference?
Thursday, June 02, 2005 8:42:00 PM

I had them for the very first time when I visited Matt in CA; I came back to my little town, and asked a friend who worked in a grocery store if they could get them in. They didn't believe they existed!
Well, a move to California cured that.

It's fun to make red, white and blue potato salad for the 4th of July.

Anonymous said…
Zarah, the first time I had blue potatoes was in Peru -- quite some time ago, long before anyone in the Northern Hemisphere had heard of them, to my knowledge. What a surprise when they landed here a decade or so later! They have so many varieties and colors of potatoes that we still don't know of here! I'm going to have to try your and Barbara's dish, since we're major fans of Indian food at our house. It looks sumptuous, and contains all Julie-friendly and G-friendly ingredients.
Thursday, June 02, 2005 9:44:00 PM

Zarah Maria said…
Hi Nicky! I have to say that tastewise, there isn't much of a difference to me - maybe there just a tad sweeter than your regular potato? Also, they are a little waxy in texture, and I'm sure they'd make a darn fine mashed potato - oh yeah, and as I mentioned to Barbara, I've also done a gratin dauphinoise (you know, potatoes and LOADS of cream, in the oven) that came out perfectly, the blue potatoe's texture was just right for that! Next time you see them, do buy - I can't wait to see what you'll come up with!

Hi Stephanie! I'd only ever seen them in books and never in the shops - and then all of a sudden, wham! on my tabletop in that drop-off box! I felt like it was Christmas or something!

Hi Julie - ah yes, memories of Peru. I saw my first real blue potato (actually that must have been before I saw them in any books too) in Bolivia, where they had all sizes, shapes and colors of potatoes! I loved just strolling around the little booths were they were towering up towards the sky - as if they could get any closer than they already where, it was in La Paz! Do try the Saag Aloo, I really enjoyed it - I'm not that familiar with Indian food, but if this sets the standard, I'm sure you'll see more Indian around here!:-)
Thursday, June 02, 2005 10:43:00 PM

Cathy said…
Hi Zarah! When I first read your post I thought I'd never seen blue potatoes before, but I took a look at Barbara's blog and realized I have - I just thought of them as purple! I can see that they are a gorgeous blue when cooked though - I'll definitely have to give them a try. Thanks also for calling Barbara's blog to my attention. I'd never seen it before, but it looks like one that is well worth following!
Friday, June 03, 2005 1:55:00 AM

Moira said…
WOW...these potatoes are amazing! I've seen so many types of sweet potatoes and yams, but never knew about blue potatoes! I'm on the lookout now, though...and I'm going to make this dish for sure- thanks!
Friday, June 03, 2005 6:15:00 PM

Barbara Fisher said…
Oh, Zarah, you got to try the saag aloo recipe! Woohoo! I am glad you liked it--and yes, you added a bit more yogurt, but that is okay--creamy is good. In fact, many other recipes for saag aloo use way more cream and yogurt than I do, and I like those recipes, too, so it is all good.

They are lovely potatoes, aren't they?

Thanks for pointing folks to my blog, dearie--I am about to post a strawberry shortcake recipe today that is just killer. If you get some good local berries, you should give it a try--it is easy and people act like you are a genius for making it.
Sunday, June 05, 2005 10:20:00 PM