I was tagged by Barbara from Tigers & Strawberries a while ago - so better late than never, and with no further ado: my answers to the COOKBOOKS meme! 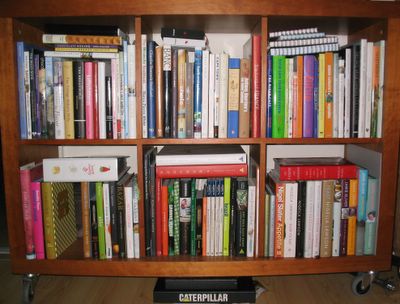 There they are - taking up an entire bookcase in the living room! I'm out of space, as you might notice, so I can't buy anymore... YOU REALLY THINK THAT WILL STOP ME?!?! Bwa-ha-ha-ha-ha! Then you don't know me very well!

I have them sorta categorized, so we have: 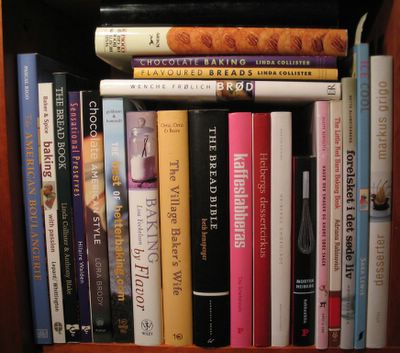 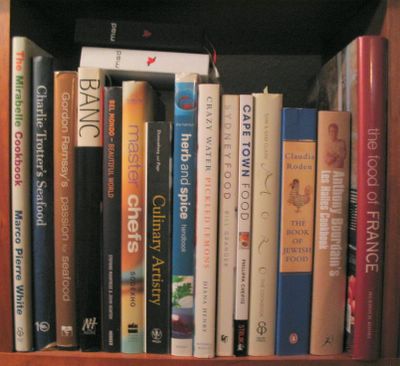 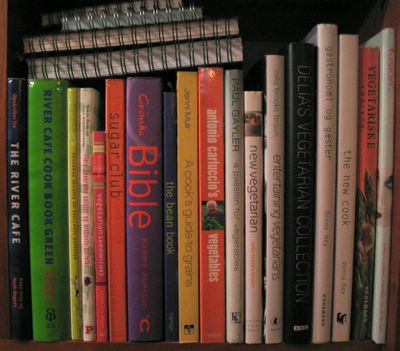 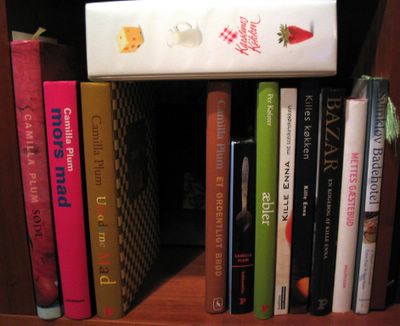 - Danish cookbooks - and no, that's not really space there, that's two books missing. My Stepmom borrowed them! 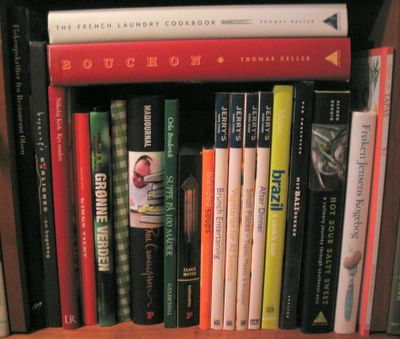 - more Danish, some odds and ends 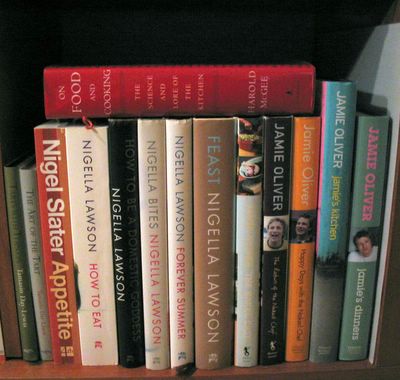 Roughly, anyways... A tiny bit of them is not legally mine, but seeing I'm the one that actually uses them, I think I have the right to claim them. In the top right quadrant you'll notice my notebooks too: 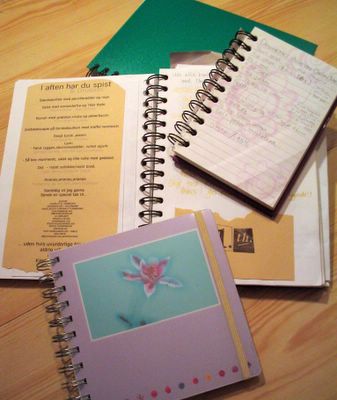 Underneath the bookcase is all of my clippings from newspapers and magazines. Oh, and then I have the equivalent of en entire square filled with food magazines too... But of course! :-)

Uh-oh... It's been a while - it's been TOO LONG! I had to check my amazon account! It was Thomas Keller's Bouchon a gorgeous book I just HAD to have. I love(d) The French Laundry - not because I've cooked so much from it, but the writing and the musings in French Laundry are plain wonderful, and fits right with my way of cooking. Haven't had the chance to look through that much of Bouchon yet, but judging from what I have seen, it wont disappoint me.

Women who eat: A new generation on the Glory of Food - bought this one because Santos had a teaser up for it on her blog. I liked it - okay, if it hadn't been because I had to go back to my textbooks, I'd have devoured it right then and there, before the delivery guy had left. Short stories from, well - women who eat. Funny stories, sad stories, disgusting stories (Eiuw, the one about the placenta!) - great stories.


Five (cook) books that mean a lot to me:

Linda Collister: The Bread Book - when I moved to London, there was no where I could get good bread at a price I could justify paying on a regular basis. So with all the time I had on my hands, I decided, heck, I can do this myself. I wasn't an entire novice, but I still see Linda Collister as the woman that taught me how to make sourdoughs, rolls, white bread and, first and foremost, to have a sense of what's going on within the dough - that it's a living and breathing thing, and that no two breads are the same. I still use it - everytime I'm trying out some new kind of bread, I'll check and see if there's a recipe for it in The Bread Book, and more often than not, I'll end up using that recipe rather than the one I originally stumbled across. The recipes haven't failed me - EVER!

Adriana Rabinovich: The Little Red Barn Baking Book - Another one I bought in London. Written by an expat American in England, that just NEEDED her cakes and cookies. It's a funny little book with old pictures and little skiing men, stars and hearts all over in the layout - but the recipes are to die for. Adriana Rabinovich's Brownie is the one to which I measure all others!

Camilla Plum: Mors Mad - As you might be able to tell, a Danish book. I had a hard time choosing which one of Camilla's book to choose, she's made 8 and I love each and everyone of them - this one is probably just the most versatile. Mrs. Plum is a sturdy woman with a lot of opinions, on all of the food-related things that matter (to me, anyways) - and then she cooks traditional Danish food, following the seasons. No discriminating though, she also adds Asian, Italian and all other stuff - thing is, she cooks like most of us cooks: one day it's traditional, the next day a curry, the day after that a gigantic salad with prawns and crusty bread on the side. I like women with an opinion, especially the ones that aren't afraid to speak them out loud, and do it eloquently - she's my version of a Danish Nigella, only even more strong willed - and she'd hate me for saying so!

Nigella Lawson: How to be a Domestic Goddess - I know, I know, everybody mentions this one. But it's true, it's a fantastic book, and I've tried so many recipes from it, I think I might consider it my most used cookbook. I like her other books too, but this really is THE ONE.

Thomas Keller: The French Laundry - working our way from the most used to one of the least used - so how come this is in my top five? I bought this one mostly because all of the chefs I worked with kept mentioning it, referring to it as the bible, more or less. I had to see what all the fuss was about. And it totally changed my view as to what a cookbook might be able to encapsulate. Not just recipes for food, a teaspoon of this, a gallon of that - but that they could actually explain to you WHY you do the things you do (don't boil a stock to death, only thing you'll do is release all the dirt that'll end up messing with the taste of it) and apply some sort of rationale to the entire process. When Keller explains, or plain tells a story, I listen - I feel like I'm a little girl getting her first lesson in the kitchen from her dad.

Which 5 people would you most like to see fill this out in their blog?

Is there ANYONE out there that hasn't been tagged yet?!?!
Email Post
Labels: Me. Meme. MeMe. Me

Cathy said…
Very interesting! I expected to see Baking by Flavor in your top five and was surprised to see most of your cookbooks were written in english. I also found your remarks about The French Laundry cookbook interesting - it's not a book that had ever tempted me before, but now I must give it a look.
Sunday, June 19, 2005 2:46:00 PM

Zarah Maria said…
Oh Cathy, I did have Baking by Flavor in there, competing with Little Red Barn - in the end I went for Little Red Barn simply because it's got the most memories attached to it for me! And I know French Laundry scares a lot of us "everyday cooks", but I didn't get it because I thought I'd be making my every meal out of it. And while it is an expensive book to buy just for the fun of it, I really think it's a very educational and interesting book, just for the text itself.
Sunday, June 19, 2005 3:02:00 PM

Niki said…
You have so many books there that I want; looking at your collection is like looking at the collection of my dreams. I'd love Bouchon, but it's so expensive here in Aust. Most books are, we seem to have some extreme taxing system that penalises people who like books. Grrr.
I notice you have "The Food Of France" up there too. My favourite recipe for chicken liver pate comes from that; god, it's good!!!
Yesterday I found an unused second-hand of Nigella's 'How To Eat, which I snapped up. I'm extremely excited, as I can add it to my Domestic Goddess & Feast. I used to work in a school library that had her other books, so I have a lot of illegal photocopies from her other publications.....
Monday, June 20, 2005 4:59:00 AM

Barbara Fisher said…
I might have to pick up one of Nigella's books one of these days...I keep meaning to, and then something else crosses my path and gets my attention, and there I am, with yet another out of print Asian cookbook in my hands.

Anonymous said…
i just bumped into your blog via the scent of green bananas. cool site you have here! i can't believe that you also have some cookbooks which i also have. yup, nigella lawson's book is right up there in my bookshelf all dog-eared and smelling of butter and cinnamon...a tad sticky on pages with the favorite recipes. i don't know if you have "Beard on Bread". Its author is James Beard. The recipes there are excellent and his insights on baking, bread and eating is out of this world. Yup, it enlightened my views. I'll hunt for the Little Red Barn book. It's intriguing... Thanks for making and keeping this blog. I'll include it in my must-visit list. Blessed be. maria
Friday, February 02, 2007 5:40:00 AM