Meme again! The Cook Next Door

Alright alright already! The Cook Next Door is hitting the food blogging world like a tornado on a rampage! And I, honored as I was being chosen by Nicky of Delicious Days, the inventor herself, am taking AGES to get my behind into gear. Fear not though, here it is!

What is your first memory of baking/cooking on your own?
I think it must have been around 4th or 5th grade. We had this teacher that used to live in Africa, who taught us how to make these little fried dough balls - and I mean DEEP fried dough! Me and one of my friends came back to my place after having done them at school and decided to try making them again. Everything went without a hitch, but when my Mom came home and saw all of that oil in the pan, realizing we'd deep fried stuff - okay, my Mom never went ballistic, but if there was ever a time in my life she'd been close to it, this was it! She didn't yell at us or anything, after all, we had no idea what we did could have turned out catastrophically - but she did let us know that we could never EVER make stuff like that again unless there was an adult around.

Oh, and then there was the chocolate cake I used to make - the cake was great, but the most spectacular part about making it was probably that we always did the dishes in the bathtub... Oh, those kids!

Who had the most influence on your cooking?
Hard one. I think most people would answer "someone in my family" to this one - or do I just think that because that's not my answer? I've told you before, my Mom wasn't quite the wizard in the kitchen - she cooked, yes, but I'm pretty sure she wouldn't have, if it wasn't because she thought her children really had to have a warm meal each day. In fact I know she wouldn't!

My Dad was the "French Cuisine" wizard, took cooking lessons and everything, boils his own stock and all that jazz. My Dad might have taught me a thing or two about cooking, but... I wouldn't say he has had the most influence.

Which brings me to those that probably have:

The chefs at the places I used to work. Working as a waitress for 4 years - working in what? 6-8 different places (no long time hiring for me, noooo ;-)), I've seen a bit here and there. Two guys, Andreas and Paul, are probably the ones that has influenced me the most - cooking in very different styles, but with a respect for the ingredient, and the particular taste each one possesses. It's not like they ever sat down and said: Zarah, listen here - this is what you do - I think I just learned from observing what they did.

Books, of course. And the fact that noone ever told me I couldn't do this thing or the other - it said in the text what I had to do, so I did it, and never even thought about the fact that the mayonnaise might split, the risotto might burn... I just did it.

Last, but definitely not least, I think my boyfriend taught me a lot, too. Our cooking styles are very different, but we're good at cutting down dishes together: this is the sweet part, this is the salty part, the sour etc. - and from that, compose something we really enjoy. We can talk and talk on food for hours, and dissect a dish into pieces. Talking about food is something he taught me.

Do you have an old photo as evidence of an early exposure to the culinary world and would you like to share it?

I have one I remember - me peeling potatoes for a potato salad. I think I'm about 12, and I DO NOT look pleased! I only have it as a paper photo, so you'll have to just make do with this one: 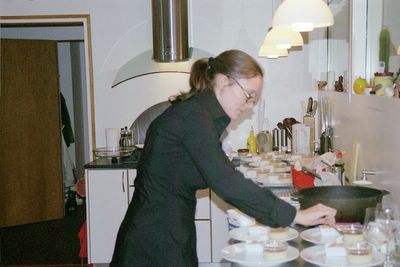 Me making dessert for my 24th. birthday - and no, that's not my kitchen, unfortunately. It's my Dad's...

Mageiricophobia - do you suffer from any cooking phobia, a dish that makes your palms sweat?

Custards. It's my Nemesis. Pouring custard, custard for ice cream, for creme brulée. I hate it. That is, I hate making it, I love eating them! But I'm always so nervous they'll split on me, that I have, more than once, cooked it too little, so it never firmed up. Ugh. But I'm learning.

Flambéeing and deep frying. I'm REALLY afraid of flames. Ironically, we have a gas stove, and that's no problem for me. But I really can't take the flames IN the pan, or the idea of there might being flames in the pan. Hmm, maybe I was scarred by that first experience?

And oh, cooking meat. Up until recently, I was a semi-vegetarian - I ate fish, but no meat. Now, I've totally forgotten how to cook it, so it always ends up tasteless and boring, and perhaps, slightly rubbery. Or maybe that's just what meat is?;-) Nah, I know other people make it taste good - I'm just out of touch with it!

What would be your most valued or used kitchen gadgets and/or what was the biggest letdown?

The most valued: I'm going to go very traditional on this one and say: my knives. I have 6 different Global knives, and they're a daily pleasure for me - they did cost a fortune, but they've been gathered for several years, so it doesn't feel as such a big investment. Unfortunately, I'm really bad at keeping them sharp - but I'm learning, slowly...

Biggest letdown: I have the most stupid little gadget-thingy's - a set of tongs for picking olives out of a jar (now what's WRONG with a spoon, Zarah?! I even convinced my Mom I had to have it! Sorry Mom!), little gizmos for making julienne... And I have a lot of things I've bought, but that is seldomly used (ice cream machine, fancy blender - I always use the cheap one anyways!) BUT - one of the things I bought that I thought I was going to use ALL the time is a wicker basket for proving bread. And - well, I just can't make the darn thing work! So it's languishing in the back of the cupboard...

Name some funny or weird food combinations/dishes you really like - and probably no one else!
Hmm... Oh! No... Hmm... Well, the peanutbutter and jelly is sort of a weird combo around here, but I really like it! Rye bread with cheese (Havarti, preferably) and spegepølse (type of salami) - I loooove that for breakfast with a soft boiled egg on the side! Is that weird enough for ya?

What are the three eatables or dishes you simply don?t want to live without?
Bread. Asparagus. Fresh green peas. Ha, no sweets there!

Any question you missed in this meme, that you would have loved to answer? Well then, feel free to add one!

Your own signature dish?
Grilled Asparagus with Sauce Gribiche

Question added by Zarah: On average, how many times a week would you cook something to satisfy your sweet tooth?
(I just couldn't help myself asking!) Three times... probably even more in the winter!

And, last but not least:

Gemma of Part-Time Pro Bono Baker - because a woman with that kind of taste in bread must have had some strong influences!

Stephanie of Dispensing Happiness (who's already put hers up! Is she fast or what?!?) - and I'd like to see Stephanie's answers because she cooks meat for her husband, even though she's a strict vegetarian. Now THAT'S dedication and LUUUUV, people!

And last, but definitely not least: Cathy of My Little Kitchen - because I feel like I know lots of stuff about Cathy, but not the answers to these questions!
Email Post
Labels: Me. Meme. MeMe. Me

Barbara Fisher said…
I, too, have had the experience of learning from chefs, even when I was working the front of the house. Most chefs teach much more by example than they even mean to, and if you observe carefully, you can often learn more from a good chef who is just going about his or her business in a day than you can learn from Food TV in a week.
Monday, June 20, 2005 5:18:00 AM

Anonymous said…
Wow, induction by fire into the world of cooking - you're lucky you didn't deep fry yourselves! ;) I also sympathize about cooking meat - I basically learned how to cook during the ten years I was a vegetarian, and learning what to do with meat was like starting from the beginning again...
Monday, June 20, 2005 5:42:00 PM

Zarah Maria said…
Barbara - hear hear! Learning by doing - or in this case watching - that's what I'm all about!

Melissa - indeed! I think it was my vegetarian stint that ruined my meat cooking abilities too!

Sarah - Oh yea, there is! They changed the name to the more sophisticated (I suppose!) hazelnut ice cream, but it is made with nutella - and it is good. They make it at our local little ice cream parlour, and I haven't seen it elsewhere - but if you do find it, let me know! I'm sure other people would love to try it too! (Judging from the amount of people that find this blog looking for anything nutella...)
Sunday, June 26, 2005 7:33:00 PM