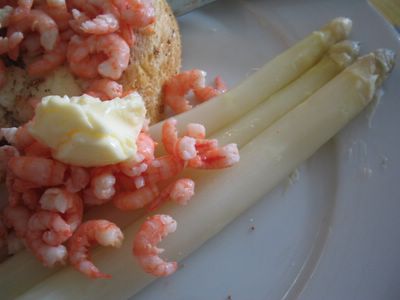 So this is one of the hard-core Danish delicatessen - there's no way I could escape posting about what is synonymous with Danish spring and summer for me - fjordrejer. It does feel just a tiny bit stupid though, seeing unless you come here, you're probably never going to have it. Then again, it might convince you to come here!

They come like this - you ALWAYS buy them alive and kicking (and they will jump out of the bowl if it's not deep enough!) 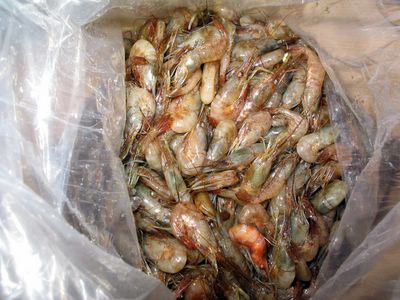 Then you boil them in a large pot of water, to which you've added salt, sugar, maybe some stalks of dill. Bring the water to the boil, add the shrimps, and let the water come back to the boil. Turn of the heat and drain. Then you have: 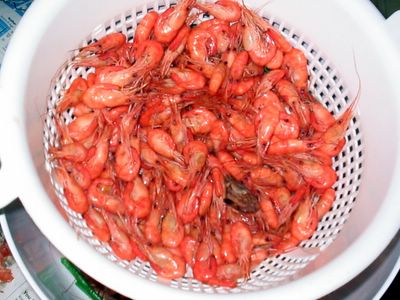 As the (Swedish) kitchen chef at my job proclaimed the other day: only Danes would be daft enough to feel they should do the tedious task of peeling these little buggers when they're this size, instead of waiting until they grow a bit bigger. Small they are: 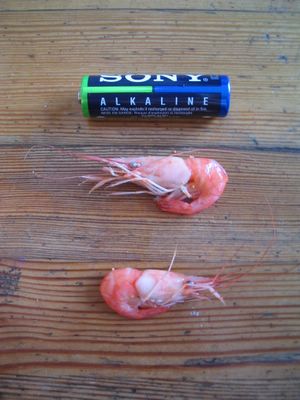 The thing is, it's not that bad peeling them when you know what's ahead of you, food-wise. And you know, with a cold glass of riesling on one side and your Stepmom (or other good company!) in front of you, peeling away like you are, it makes for quite an enjoyful event.

And it's ALL in the technique. Long fingernails will make things a little easier, but it's actually not that hard:

Release the back shield - 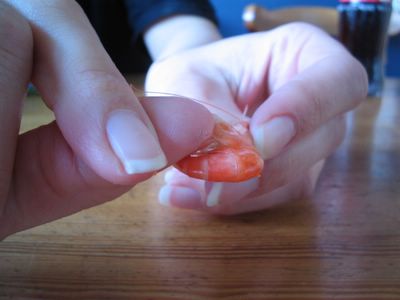 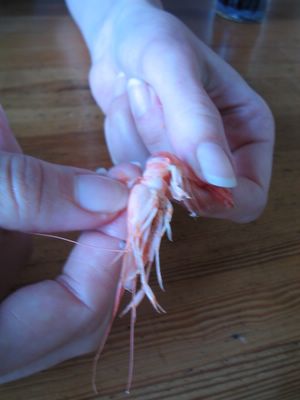 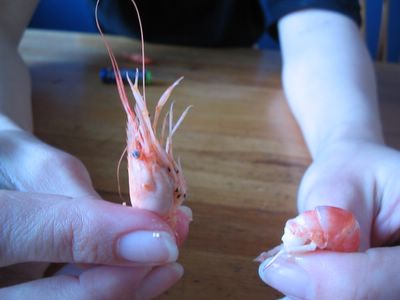 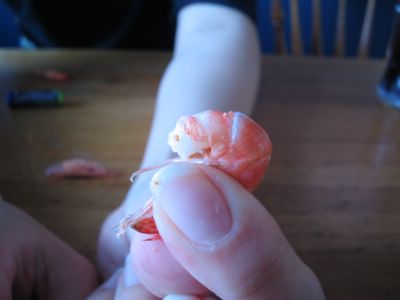 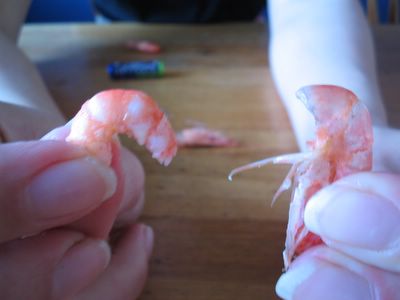 Hey PRESTO! (Uh-oh - isn't there some tv chef that uses that expression??) 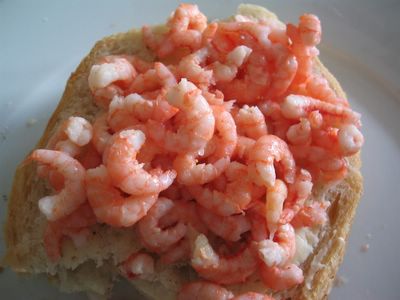 - add mayo, maybe a squeeze of lemon if you feel so inclined. Some people would call that sacrilege - "The taste is so delicate, you shouldn't mask it with mayo or any other thing!" Well, as my Stepmom use to say, if that's the way you like it, why on earth shouldn't you eat them like that, even though other people think it's weird? (Suppose that goes for all kinds of eating!) Always, but always, freshly ground black pepper though. And you know, if you are as lucky as we were, you'll have an aunt and an uncle that just returned from Samsø, carrying with them 3 kilos of freshly dug white asparagus and you could choose to eat the fjordrejer with those, like in the first picture. But I know, not all people can be that lucky... ;-)
Email Post
Labels: DANSK Smørrebrød

Zarah Maria said…
Hmm - I think me and my Stepmom averages at about an hour - an hour an a half for peeling 3 kilos. I don't remember exactly how big a batch this one was, I've collected the pictures over quite a while. But it honestly isn't as bad as it sounds!! We sit and chat, sip wine, slap hands trying to catch a couple of shrimps before time... I've done it a couple of times alone and that is just BORING!
Tuesday, June 28, 2005 2:07:00 PM

eat stuff said…
Oh
Thatlooks soooo yummy! I like the idea of cooking them with dill... although we normally buy them already cooked (but MUCH BIGGER) and eat them with bread and butter (and a bottle of sparkling shiraz *sigh*) I hope that you make some really good prawn stock with all the heads and bodies!
Tuesday, June 28, 2005 3:16:00 PM

Stephanie said…
Ooh...shrimps are one of the few things I miss these days. That looks so good, and the aspargus? Yum.

Sam said…
Zarah M. They look stunning. You can come and help me peel my prawns any time. Did you have to devein them first? That's what all my friends were doing for me last time I made dinner. I hate doing that kind of thing. I am so lacking in patience!
Wednesday, June 29, 2005 6:17:00 PM

Ana said…
Mmmm! I think that I would like to eat them as I peel them with a very cold beer.

Zarah Maria said…
Hi Clare! We make a bisque-type soup with the heads and bodies - I never thought about making a stock, but I'll remember that the next time!

Hi Alice! Yup, would be torture! Luckily, it seldom happens that I have to peel them alone.

Hi Stephanie! I enjoy making the posts too!

Hi Barbara! Some people do eat the heads, especially if you instead of boiling them roast them in the shell. I don't though - they have this little pointy thing on their heads that can potentially hurt your mouth badly!

Hi Sam! I'll peel your prawns any day!;-) And no, no deveining - luckily! I'm usually pretty patient, but I'm not sure I would be if I had to devein these!

Hi Ana! That would be perfectly alright! And the name (fjordrejer) has nothing to do with either bread or asparagus - it's just the name of the prawns. Fjord means fiord or inlet (the place they're caught) and rejer means prawns! See, Danish is a breeze!
Thursday, June 30, 2005 11:35:00 PM

Anonymous said…
Daft Danes, huh? Make that "and Filipinos too"!

What a great post Zarah! I love these shrimps and I never thought of eating them straight on bread although I make omelettes out of them. Another simple but tasty meal would be to have a partner dipping sauce of fish sauce (patis or nam pla) and lemon. Eaten with a steaming plate of freshly steamed rice, and you're in heaven!