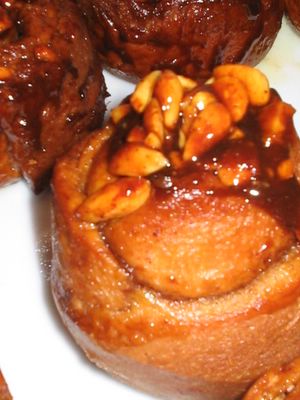 Well, that's not what they're really called, it just came to me now. Again, the recipe is from Baking by Flavor (just let me know when I'm pushing this book a little to much at you, m'kay?;-)) and I'm pretty sure the results will be amazing if you don't do the two things I did :
1) forgot to put salt in the dough
2) was too occupied reading some food blog (now how did that happen?!?) and let them have just those two minutes too long in the oven.
I know - stupid - stupid - stupid!

The recipe - Oh, I'd love to give it to you, but I've already posted a couple of recipes from this book and my conscience is nagging at me. But I'll let you know this. It's a three component affair, elaborating over 3 pages in the book . You start by making the yeast dough (which you can leave to rise in the fridge if you want, thus stretching the preparation of the buns over two days) and then there's filling and a so-called sticky mixture.

What I found untraditional compared to how I've always made cinnamon buns (Or Snegle as they would be in Danish (literally means snail)) is that the filling is like a crumble and then you put it on top of butter that you've smeared across the rolled-out dough. Like this: 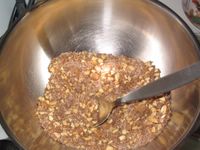 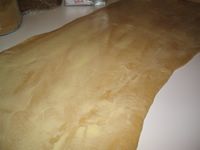 And that gives you: 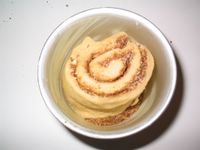 As for the sticky mixture: 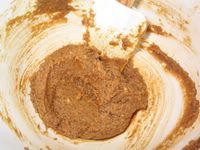 - that goes in the bottom of the muffin cups and makes the oozy, caramelly topping. This looks more like what I'd usually put on top of the dough, then roll it up. But alright! It sure did work!

Luckily, I hadn't totally ruined them, the taste was definitely alright, only the texture a little too crunchy to my liking - but no one to blame but myself... 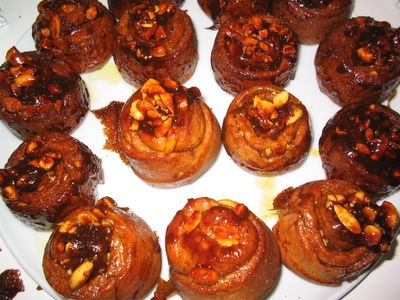 Seeing I can't just leave you here drooling with no recipe (and although amazon is fast, I'm sure they wouldn't be fast enough right now!) I'll point you to these: Moira did some fantastic looking Cinnamon & Cardamom buns the other day (From a book that is high on my wish list) - and I've also had great results with Nigella's (regular) Norwegian Cinnamon Buns (p. 322) and the wicked, wicked Schneckens (p. 324), both from How to be a Domestic Goddess. Do enjoy!

Anonymous said…
the nigella norwegian cinnamon buns are one of the first recipes using yeast that I ever made and it succeeded. I remember I was so proud that I've baked 'em a couple of times again. However, I usually get about 23 buns and they dry out fast so sometimes I make french toast out of them .

are those pine nuts or slivered almonds on top of yours?

Anonymous said…
I had the exact same problem Lee, so I used to freeze the unbaked buns, then thaw them for a couple of hours and bake - they got even gooey'er (what a word!) and really nice! And that way, I could just bake the amount needed, not having to worry about them going dry. Not a bad idea about the french toast though..

And it's almonds on top - the recipe actually uses pecans or walnuts, but I'm not a huge fan of walnuts, and pecans are a fortune around here!

Anonymous said…
Hey Zarah, these look fabulous. The same thing happened to me last winter when I went through my schnecken craze (remember?) -- it's really easy to overbake these little beauties, coz that sugar glaze hits a turning point where it goes from molten lusciousness to blackened tar really fast...fortunately yours didn't hit that spot!

Anonymous said…
Slightly crunchy or not, they do still look delicious! [thinks sadly of her salad lunch]

Anonymous said…
Yum yum yum yum yum! Would you believe I never cooked with yeast before. I'm planning on Nigella's Schneckens to be my de-flowering from this virginal state!
PS - you wanted to know how the comments box was going. I've noticed it's stopped "remembering me", which is weird. It's been ok before.

Anonymous said…
My husband and I have a deal--he is teaching me to play guitar, and I am teaching him how to bake bread.

I have no doubt that as soon as he masters basic yeast dough, he is going to take up making cinnamon rolls. I just know it. He is a cinnamon bun fanatic.

I will chronicle his attempts as they happen in my blog, complete with pictures.

Your buns look good. I am odd--I actually like crispy sugar glaze sometimes. And I like the dark flavor of sugar that is not quite, but nearly, burnt.

No worries--the next time, they will be even better and by the third time you make them, you will be a pro.

Anonymous said…
I'm not going to lie- those buns look incredible! If I ever want to go for their gooey goodness, I'll be dropping you a line...

Anonymous said…
OMG Julie, do I remember the Schnecken craze?! Indeed, Schnecken Frankensteins and all! FUNNY!!

Dagmar and Moira - thank you! And Christina - sorry 'bout the salad lunch, I hate it when that happens!;-) A reason for NOT checking blogs during lunch, you start craving the most-impossible-to-get things...

Barbara - I'm looking forward to seeing how you're hubby's doing. Are you adding a sound-thingy so we can hear how you progress on the guitar as well? That would be neat!:-)

Niki - once you go yeast, you'll never go back! And well, once you've tried the Schneckens, you'll never want to eat anything but them! Mmmm... And I've noticed the remember me thing as well - I don't know why that happens, it's kind of missing the point then... I'll see if I can find out what the heck is going on... Thanks for telling me!

Anonymous said…
You've got these cinnamon stcky buns down to a fine art, Zarah. Well done, and don't worry about the caramelised sugar, it gives them their own unique style.

And by the way, it's Frankenschnekens!LOL

Anonymous said…
That's what it was - I knew there was a missmatch with my words! Thanks Caroline, LOL!