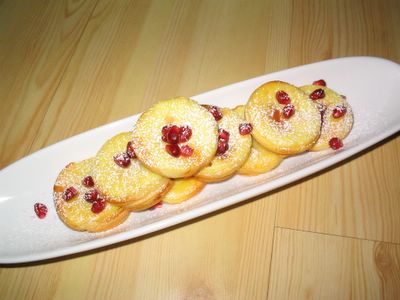 Puff pastry! Puff pastry? PUFF PASTRY?!?! I mean, seriously! Clement, this is a hard one! Nevertheless, I will not succumb, I must once again join the challenge that is Sugar High Friday!

This time hosted by none other than the picture-fantastique photographer and blogging role model Clement at A la Cuisine! (You seriously have to take a look at his blog, his pictures takes my breath away!)

But puff pastry. Whatta?! I am - as always - all for a challenge. And I wanted to make puff pastry myself, oh yes indeed I did. But then, as I realized Friday was drawing VERY close, and I had no idea yet as to what to make, I thought: you know what? Shop-bought would be good here - especially considering the fact that I never tried doing puff pastry from scratch before, let alone using it in sweet dishes. And hey, it was on offer, would you believe the coincidence? Maybe they knew SHF was coming?

Mind you, I have tried eating puff pastry-thingys. I was never really impressed with it, I think the flakiness annoys me somehow, and I often find them greasy and palate-cloying. And now is the time for you to tell me that that is because the puff pastry I've had was made with margarine (EIUWW!!) and all sorts of other nasty stuff that has no place whatsoever in puff pastry - I know, that probably is why the experience hasn't been mind-boggling so far...

So I'd been eyeing this ripe pomegranate in our fruit bowl for the last couple of days, thinking I might be able to do something with it - stamp out a little disc of pastry, dust it with confectioners sugar, a creme patisserie... Doesn't sound to bad, does it? But then last night, as I was doing the obligatory in-bed cookbook reading before I went to sleep, this one leapt out at me from Delia's Vegetarian Collection: Richmond Maids of Honour - complete with lemon curd and all! I thought that a GREAT idea, I had been thinking I wanted something slightly sour to cut through the cloyiness, and I even knew I had a jar in the fridge, bought through my organic vegetable delivery company! Ah! Problem solved! 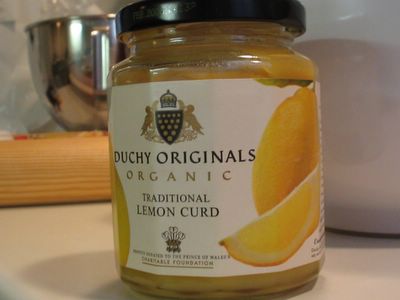 I'm not that skilled in the world of curds, but this is really nice, sweet, yet sour and tart enough to make the edges of your tongue water!


Richmond Maids of Honour - muahaha, found the recipe on her site - less typing for me! Complete with cute story and all!

Now, you can say what you want about Delia (really, you can - I don't run her fan-club, nor am I a member! - but a book with Vegetarian Collection as a title I can't resist! You can only say it if it's funny too, though!;-)) - but if you ruin her recipes, it's not because her instructions weren't thorough! This one was a breeze to make, I even took the liberty of just throwing the things together instead of weighing them. Little less than half the jar of ricotta (which I used instead of curd cheese, 'cause I figured hey, ricotta is a curd cheese, innit?) spoonful of sugar, grating of lemon zest, spoonful of almond flour... oops, no candied lemon peel, but what do you know, it didn't really matter, now, did it? I only made 8, I've been having - not exactly problems getting rid of the food I make, funnily, the cakes always disappear! - but I've been feeling just a wee bit guilty cooking so much food lately, and not for any special occasion. Guess you could say SHF is a special occasion though! Anyways - I sorta halved the recipe and got 8, that's what I wanted to say! Delia says you should roll out the puff pastry, but not to which thickness. I rolled out my pastry to about 3 mm., but had leftovers, so four out of the 8 got double pastry - I actually liked that. I'd say roll to about 5 mm thickness.

Results: Breeze to make, and really nice, tangy and with the tangyness, not too much of the palate cloying I've been used to associating with puff pastry. They where good! Next time, I'll make them with my own puff pastry (I read what was in the one I bought. Ugh.) - and I'm sure they'll be some nice recipes around after this.

And now you're going - but that has absolutely NOTHING to do with pomegranates, does it? Well, when in doubt, decorate! Tadah! (and the crunchy seeds proved a nice contrast to the soft, creamy filling and all the flaky layers) 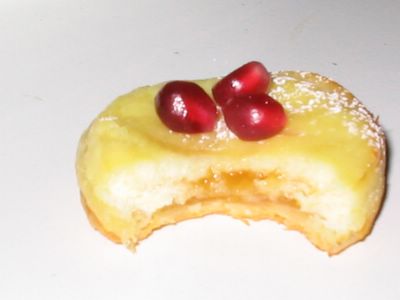 Slightly fuzzy picture - and slightly dark picture... I want a new camera - sigh! But you get the idea, right? 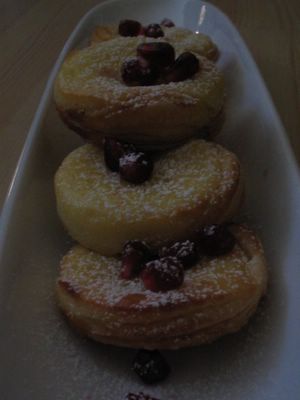 Anonymous said…
That looks so lovely and delicous. But, isn't SHF next Friday? Or does this mean that I have missed my first SHF :-( ??? *Confused*

Anonymous said…
They look delightful - I love lemon curd and am inordinately fond of shortcrust pastry lemon tarts but oddly enough I've never tried these. Obviously something that needs to be remedied!

Anonymous said…
These look delightful - I love lemon curd and am inordinately fond of shortcrust pastry lemon tarts, but oddly enough have never tried these. Obviously a situation that needs to be remedied!

Anonymous said…
I think Delia's cool! Err, Zarah, you're gonna kill me but check this out:
http://canard.typepad.com/oslo_foodie/2005/02/music_in_my_kit.html

Anonymous said…
Well DOH! It isn't until next Friday - sorry if I've caused any confusion Dagmar - and everyone else... I've been so close to missing out all the other times that I guess I just convinced myself it was today so I wouldn't be on the verge of not being there again. You know, this means I might have a go at making that darn pastry myself...

Anonymous said…
Oh, Zarah! I almost did the same thing, and then my husband said, "I thought it wasn't until next Friday!" and saved me.

Your dessert looks fantastic; I'm going to use a pomegranate in my entry, too! I'm loving poms almost as much as cardamom! (lol)

Anonymous said…
hi zarah! i love lemon curd, i'm definitely going to try this recipe. and bravo to you for wanting to make your own puff pastry!

Anonymous said…
Ah! Photo enhancement! I've got a lousy program-thing that I can't really figure out how works! Any neat tips, links or programs you can recommend Santos?

Jennifer said…
Zarah these look and sound really great! And you had them done early! Good for you! I'll have to remember these...I have pomegranate sitting in my kitchen awaiting me as well...
Tuesday, February 15, 2005 3:53:00 PM