Show me your Kitchen...

I've been doing a major clean-up in my kitchen - after 3-4 months of general neglect, due to school, I'm always sorta looking forward to getting in there, moving everything around and finding long forgotten interesting ingredients, putting everything in it's place, getting out the soapy cloths and really giving everything a good run-over. It usually takes me at least a day, even though our kitchen is small, but I enjoy it, have loud music on an do a little dance every now and again.

So I was shuffling around all of the boxes, cake pans, plates and stuff, putting everything on the floor to be able to clean properly. I'm a BIG fan of Sex and the City - I have all of the episodes on DVD and LOVE watching them again and again. When the last episode was airing, me and a couple of girlfriends got together and sat there screaming: He's behind you, TURN AROUND!!!! and would have sipped on Cosmopolitans, hadn't it been a school night. So for those of you as obsessed as me, it's in episode 64 "Ring a ding ding", where Carrie realizes she's spend her life earnings on shoes instead of an apartment, and goes: "I will litteraly be the old woman who lived in her shoes!" Well, I'll literally be "The old woman who lived in her... 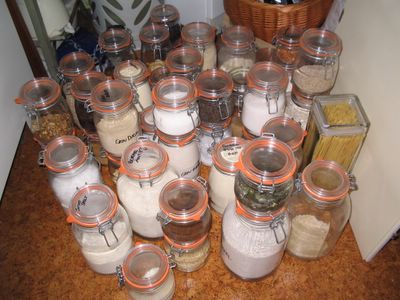 Anonymous said…
Hi Zarah - looks like a good system to me! I also have all the DVDs for Sex and the City!

Anonymous said…
Cathy, I'm starting to think we are one person ripped in two, living on either side of the Atlantic! I love my DVDs and have a weekend Sex and the City extravaganza planned for the girls soon... Now I just have to figure out what they eat, I mean, woman can't live on cosmos alone... Or could she, hmm..?:-)

LeeLoreya, there is a couple of homemade scented sugars in there, vanilla, orange, lemon and rosemary, but it's mostly various types of flour - wheat, rye, durum, spelt etc. Luckily, the jars aren't too expensive, that's why I have so many, and I really love the fact that I can see everything I have, right there on the shelves. It makes for a nice AND practical kitchen decoration!

Anonymous said…
I was gonna ask, 'what on earth do you HAVE in all those jars', but my question has been answered!
You know what I think would be really interesting? A day when lots of food bloggers take a photo of the kitchens in which they work to prepare all the food they write about and photograph. I'd love to see what your kitchen looks like, as I'd love to see so many others. Perhaps seeing Cathy's little kitchen on her website inspired me. What do you think?

Anonymous said…
Funny you should mention it Niki - I have several drafts showing my kitchen from different angles, contents of cupboards, cook book shelf etc. hanging around, just waiting to be posted! I figured I'd use them when I get into my next semester at school - that way I don't have to spend a lot of time taking new pictures, up-loading and so on, but can just sit down and in a flash refresh my blog, so it won't feel all abandoned even though I'm studying. Figured I better enter prepared for this semester, so I don't go all depressed being away from the blog baby... And yes, I think it would be a lot of fun to see everyone elses kitchens as well - a day for it might not be a bad idea at all! Sightseeing the Blogger Kitchen...