Can I make dinner?!

Yay! I had an evening off, and was stumbling around at the local Irma (grocery store, but one of the nicer ones) trying to figure out what to put on my plate. It's like once you get out of the habit of making dinner on a daily basis, you just keep wandering around, loking at what might be really nice produce - and nothing springs to mind. Guess it happens to people that make dinner on a daily basis as well, but you know what I mean - I know I'm not the only one! Still, it's just agonizing when the only thing you want to do is make yourself something really nice - and you're just BLANK!

Then I found this really nice jar of pickled cucumbers. No, I'm not pregnant - at least I don't think so?! - but I've always had a thing for these - crunchy, sweet-sour and savoury. Mmm. And -swish!- there it was! The image of a bean salad with pickled cucumbers I have actually made a couple of times, but with a twist: I knew there was spinach in the fridge at home... What's good with spinach? Ah yes, eggs... coarse grain mustard... garlic, lots of garlic... 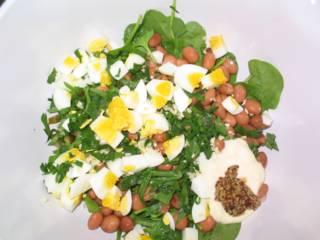 The fridge was also hiding some parsley, harissa, and in a bowl on the table top was an avocado I've been trying to ripen - now it was! Can of borlotti beans, salt, peber, a spoonful of creme fraiche, stir it - and serve it! I enjoyed it with an episode of "Everybody loves Raymond" - ah what a night!