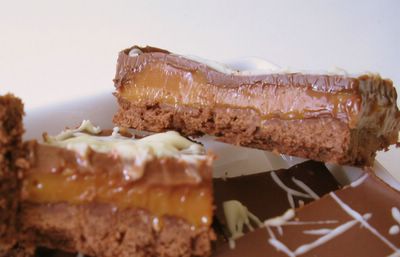 It just wont go away, that Sugar High Friday - and it most certainly wont this Friday, 'cause the theme is Stuck on You - it's caramel! Ingeniously thought up by Debbie at Words to Eat by, this months installation's got you whipping out those pans, burning those fingers and ruining those rubber spatulas!

Except for me. Hold on, hold on - you really didn't think I'd stay away from a Sugar High Friday, did you? Well, think again - if you thought I stayed away, 'cause OF COURSE I didn't. Au contraire, I've been known to do a double take!

And I like caramel. I do. But I LOVE it's cousin, dulce de leche. So I asked Debbie if she would allow using this sweetened, milky, caramel-cousin - and she said YES! We-hey! Then I knew exactly what to make!

A couple of years ago, living in London, having not as much money as we could've wished to spoil ourselves with, the Boyfriend and I took to buying each other little gifts instead of just buying oneself presents. So after a "I'm-not-buying-anything-browse" through a Habitat shop, where I'd been eyeing a huge table with loads and loads of cookbooks, my boyfriend came up to me when we got out of the shop and handed me this little book called Chocolate Temptations by Linda Collister. Oh my. Mmmmmmm - chocolate. My friend.

Plenty a cake was then baked in the little studio flat - when people came to visit from back home, they would have the book (Or the Little Red Barn one) shoved in their hands, with the question: which one do YOU want me to make?? Chocolate Crackles (My friend B's cookie), Black and White Cookies (My Mom's), Fudge Brownies (It was a poor excuse for a brownie, so I wouldn't want to dedicate it to anyone!) Chocolate Ginger Bread... and well, then there was the one recipe, at which everyone stopped in their leafing through the book and just stared. Myself included. It was a two-page picture of a dark shortcrust thing, with a thick layer of caramel, topped with dark and white chocolate. On the next page was the recipe, with a spoon of dark, fudgy caramel. It was called Squillionaire's Shortbread, and included boiling a can of condensed milk to oblivion, turning it into that lovely thing they call dulce de leche. I didn't dare. I just didn't - I had pictures of projectile caramel all over the tiny kitchen, me ducking so as not to be hit by the wayward can. Wouldn't want that.

We returned home, forgot all about the recipe and dulce de leche. Then I started food blogging and everything came back. And just a month ago, M, The Boyfriend took the first step and boiled a can. OMG. Once you've gone there, there's no turning back. And with this theme, there was nothing I could do, but find the book and finally make:

Makes 16 (or more like 25 in my case - really depends on how you cut them, but I strongly suggest you cut them small - they're very RICH!)

23 x 23 cm. cake pan (greased if it's not non-stick - I have one with a removable bottom, worked a charm ungreased)

Put the unopened can of condensed milk in a heavy pan of water and bring to the boil. Leave to simmer, without covering the pan, for 3-3½ hours. Under no circumstances are the water to go so low so it doesn't cover the can. Keep topping it up - I usually check on it every 15 minutes, but probably only top it up every ½ hour. I'm just trying to be cautious. Let the can cool COMPLETELY before you open the can.

Make the chocolate biscuit base by beating the butter until creamy, then beat in the sugar. Sift the flour with the cocoa into the fluffy butter/sugar mixture, then, working with your hands, make a smooth dough (It is sorta crumbly, but eventually it will turn smoother) Press the dough into the cake pan, making an even layer. Prick well with a fork, chill for 15 minutes.

Bake the base in a preheated (180 C) oven for 20 minutes - until slightly dark around the edges. Don't overcook, it will turn bitter. Let cool.

When completely cold, spread with your dulce de leche. Chill until firm, 1-2 hours.

Melt the dark chocolate. Remove from the heat, then stir in the butter (I actually forgot the butter, but I suppose it will make for smoother cutting out in squares when you get there.) When smooth, spread over the caramel, then leave to set almost completely (goes pretty fast, remember the caramel is cold) Melt the white chocolate, then using a fork or paper icing bag, drizzle it over the dark chocolate. 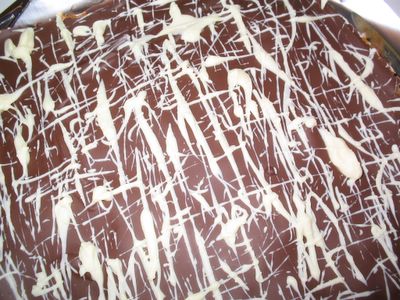 Leave overnight until firm before cutting.
Eat within one week.

As I already mentioned, they're VERY rich, very sweet - but sinfully good! I cut them into really small squares - half the size you see on the picture - I think they where 3-4 cm x 3-4 cm or something when served, the ones on the picture being 3 by 6, more or less. I had enough to eat with tea with the Boyfriend, bring some to one meeting and even some to the next meeting as well! Everybody loved them - I think I have to start bringing goodies to more meetings, everything runs just a tad smoother, what with all that caramel:-) 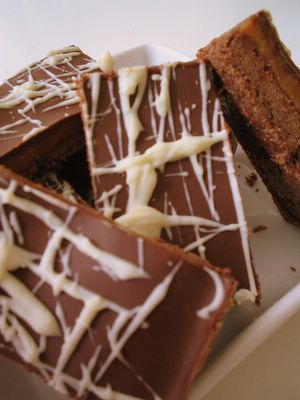 My teeth are already shrieking for more caramel - so what got Stuck on You?
Email Post
Labels: Chocolate. Must. Have. Events

Andrea said…
What a surprise!
I have a slightly different version of this caramel cake.
The caramel in my recipe is very simple and quick to make.
And the base is done with oats.
Take a look.
Friday, March 18, 2005 9:58:00 AM

Anonymous said…
Holy cow, Zarah- those look amazing! My teeth are hurting from all the way over here, but I'd still scarf one if I had the chance! ;-)

Anonymous said…
Wow, those look amazing! A whole batch of those would be a dangerous thing to leave lying around my kitchen!
Friday, March 18, 2005 4:34:00 PM

Anonymous said…
Zarah, I too did a version of Millionaire's Shortbread -- mine is an orange variation! Too bad we can't all have tea with a plateful of our assorted goodies!
Friday, March 18, 2005 9:00:00 PM

Niki said…
They look astounding, and, interestingly, similar in theme (base, caramel, chocolate layers) to what I made! I'd love to be able to taste yours, though!
Saturday, March 19, 2005 3:52:00 AM

Cathy said…
Zarah - I stumbled on this picture the other night (it showed as a recent post on your archive pages, though not on your main pages) and was wondering when you were going to tell us about it! They really look incredible!
Saturday, March 19, 2005 5:55:00 AM

Zarah Maria said…
Thank you for all of your nice words! As I've already told, I did not scarf them all down myself - I hurried and got them out of the house!

Someone should figure out a way to send our goodies between us over the net - there are so many of the SHF entries this time around I'd love to try!! And it would come in handy in everyday blogging too! Anyone with a great idea??:-)
Sunday, March 20, 2005 9:41:00 PM

Jocelyn:McAuliflower said…
I just can't help but return to this photo over and over. I love how you can see how the knife dragged through the layers in the top most picture... almost like tooth marks :)

santos. said…
>Someone should figure out a way to send our goodies between us over the net - there are so many of the SHF entries this time around I'd love to try!!<

McAuliflower - thank you! I was actuallly a little dissatisfied about the knifemarks - I thought I was being really clever, heating the knife before cutting and that this would make sure everything was nice and smooth. But you know, they're homemade and they have a homemade touch - and that's not so bad! I'm glad you like the photo, I'm getting more and more pleased with it myself too!

Jennifer said…
WOW. Can I just say WOW???? You boiled the can with good and safe results? I'm impressed.

We had a similar "problem" last November with the IMBB cookie swap - we all wanted to taste the amazing sweets everyone had made. We are definitely going to have to concoct some sort of cookie mail swap (I send you cookies, you send them to Viv, she send some to Niki and so on and so on)...!
Monday, March 21, 2005 2:10:00 PM

Anonymous said…
dutch processed cocoa is darker in colour, valrhona is likely dutch processed. it is the cocoa americans think of as european. lighter natural cocoa is the cocoa such as hershey's or scharffen berger that hasn't been alkalized.
Monday, March 21, 2005 8:48:00 PM

Niki said…
I second Jennifer's comment! Yes please! I can think of nothing better than receiving cookies in the mail....the only downside being that they might be a bit stale after going via Europe and USA to Australia (it recently took over a month for something I bought on Ebay to get from LA to Melbourne....grrrrrr. Damn strict Australian Customs dept!)
Tuesday, March 22, 2005 2:01:00 AM