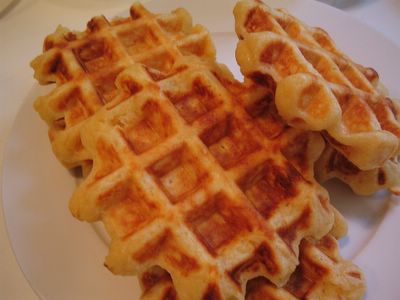 Making waffles was what I did - not tomorrow, but Sunday morning for breakfast. You see, my sweety-pie of a Boyfriend, found this: 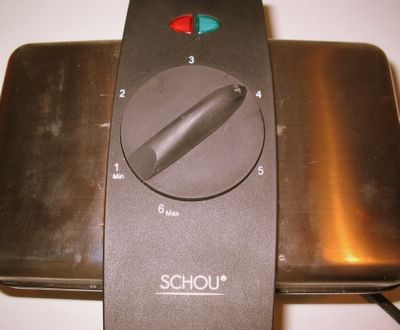 on sale a couple of months ago, and I thought it about time that I inaugurated it. That, and okay, there was no more bread to eat for breakfast!

I used a recipe found at the King Arthur Flour site - I was introduced to this site by Fae of TinyFork (where are you Fae? Are you still there? I miss you!) and they have all sorts of cool recipes! In Denmark we don't have King Arthur Flour, but hey, my guess is I wouldn't run out to the store to get some even if we did! I just used my regular ole organic flour. They have a TON of different recipes for waffles, but the one I liked the sound of was the Classic Buttermilk Waffle. I had buttermilk in the fridge, just waiting to be used, and I liked the fact that the recipe didn't overdose on eggs. I wanted a plain, no frills waffle for my first batch.

As it was, I did go and change bits and pieces. So here goes:

Basically, you stir together the wet ingredients in one bowl, the dry ones in another, then mix them up. It's pretty simple, and not hard to do on a Sunday morning even though you might have had a little wine the night before!;-) 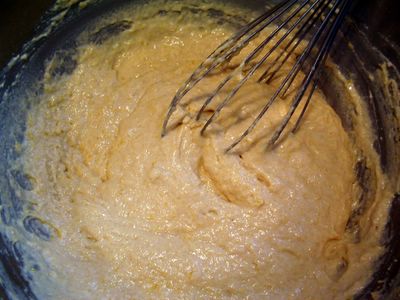 But ey - why not make a little bit of this, a little bit of that? Having tasted the first batch - well, I had to see if they were any good, didn't I? - I decided that I loved the slight tang of buttermilk - but maybe they were just a tad to bland. I divided the batter in two, and out of the fridge came Parmesan - grate-grate-grate - and there you have it! Buttermilk-Parmesan Waffles!

As it was, we would need breakfast-dessert too, so the other bowl got a shot of vanilla-scented sugar - mmmm....

I had just been leafing through one of my cookbooks that mentioned this: 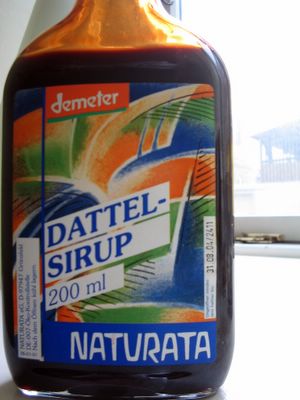 Date syrup, recommended as a substitute for honey or maple syrup. I don't know how it got in there (okay I do, shsh!), but I had some in my cupboard. So what better way to go with that and thick creme fraiche than: 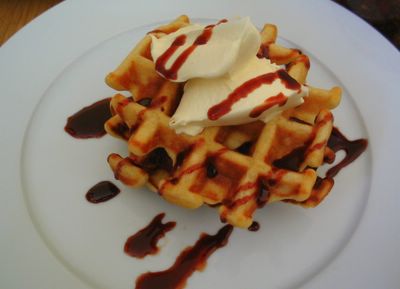 It was indeed a beautiful Sunday morning...

Stephanie said…
Oh, how funny. We bought a waffle maker last Thursday! And since I needed a recipe in a hurry, I made one from the instruction manual...still, Alex liked them, and they're heaps better than the frozen crap he'd been eating.
And thanks to you, I've just looked up the King Arthur Flour site...nice!
Monday, March 14, 2005 9:52:00 PM

Cathy said…
My gosh Zarah, they're beautiful! I'm afraid I don't have a very good track record with waffles...in fact I'm not sure, but I think I may have gotten rid of my waffle-maker. I tried it two or three times over a period of many years and despite the fact it was non-stick, I had a terrible time with sticking. On top of that, the waffles weren't crisp (which may have been the recipe rather than the waffle iron). Anyway, maybe I should try the Belgian waffle iron that my mom is storing in my basement. Maybe I'd have better luck with it.
Tuesday, March 15, 2005 3:57:00 AM

Zarah Maria said…
Dreska - get one! I tell you, they're fabulous! And mine stores pretty easily...

Cathy - thank you! Dust of that old iron and get waffling missy! I wouldn't say these were exactly crisp -I can't wait to try and make those real fat, caramelly Belgian waffles... Mmmm, with soft vanilla ice cream and... YUM!
Tuesday, March 15, 2005 5:25:00 PM

Barbara Fisher said…
After we move, I shall have to invest in a waffle iron, as we will no longer be living in close proximity to a Waffle House. Which is a pretty scary breakfast diner chain thing, but they make fine waffles.

Besides, it gives me an excuse to declare a monthly "waffle" night, and invite folks over for waffles and fried chicken and movies.
Wednesday, March 16, 2005 4:25:00 AM

Nic said…
Those are some fine looking waffles, Zarah. Parmesan for breakfast sounds a little strange to me, but maybe for a dinner waffle...
Wednesday, March 16, 2005 4:53:00 AM

Zarah Maria said…
Barbara - I'll come for sure! Fried chicken, movies AND waffles?! That would be an awesome night!

Nic - Thank you! I know with the parmesan, but I love my cheese morning, noon and night! Although it would probably make for a neat dinner waffle - a little tomatosauce/bean-casserole on the side or something... Or just a salad... Oh now you got me thinking!
Wednesday, March 16, 2005 1:14:00 PM

Lynn said…
HI,
I stumbled on your blog when looking for a good recipe for waffles like I had when visiting Copenhagen, Denmark last May.
I think I may have to try your recipe....next Sunday!
:-)
Lynn
Sunday, January 11, 2009 11:00:00 PM