A Year of Brownies - January 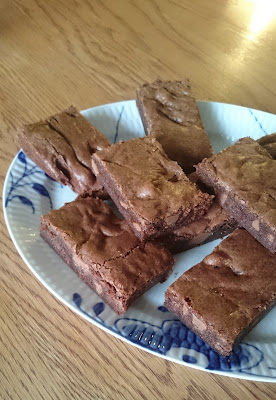 Like I said, I already have a brownie recipe I find pretty perfect. It has no add-ons, save for extra chocolate, when I feel like it, it comes together in no time, and I almost always have all the ingredients at the ready. Come to think of it, this recipe may have been one of the first brownies I ever made. The book that it comes from is one that I bought back when I lived with my still-boyfriend in London, back in 2000. It's called The Little Red Barn Baking Book and is written by Adriana Rabinovich, who - I just found out - has a gluten-free-centered blog called Gluten-free Cooking for Kids. Back in the days, her company (also named The Little Red Barn) sold brownies, cookies etc. to Starbucks, Fortnum & Mason's and Selfridges to name a few, and she decided to share her recipes in this here book. aIt was a little unassuming number, but the amount of recipes I wanted to make - banana bread! cinnamon buns! Devil's food cake! Snickerdoodles! -  as I paged through it was numerous. It was one of the only baking books I had for the six months we lived in London, and as is apparent from all of the scribbles and splatters in it, it was much used and loved. Still is, in fact. Not only the brownies, but also her banana bread and carrot cake are keepers. 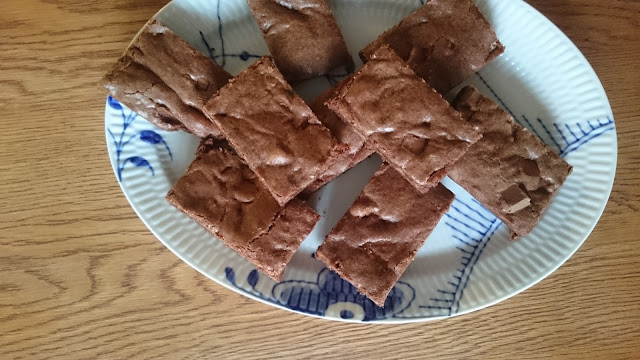 Onto the brownies! In the book, it's the recipe called Rum and raisin brownies, but if you leave out the raisins, it's a classic one. This is definitely one of the fudgier versions, dense and not cakey. I've had some people finding it a tad on the sugary-sweet side, but I just really like it like this and wouldn't change a thing.

Preheat the oven to 170 degres Celsius. Butter and flour the cake pan. (I usually put in a sheet of baking paper, fitting it to the pan - it's much easier to get it out this way)

Sift flour and salt into a large bowl; melt the chocolate and butter in the microwave or in a double boiler. Add the sugars to the melted chocolate/butter mixture and leave to dissolve slightly. Stir to combine. Add the eggs, one by one, beating after each one. This will produce a very glossy mixture. Gently fold in the flour, taking care not to overmix. Fold in chocolate chunks if using.

Spread in the cake pan and bake for 20-25 minutes in the preheated oven. Leave to cool completely before cutting into squares.

Makes 16-20.
Email Post
Labels: A Year Of... Baking for the Sweet Tooth Chocolate. Must. Have.