SHF#22: Can You Can? Rhubarb Cordial 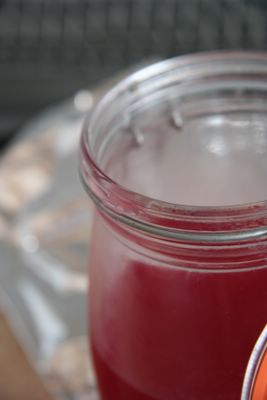 Way back when I used to do a regularly scheduled blog, I ALWAYS took part in this brainchild of Jennifer, The Domestic Goddess - The Sugar High Fridays. Then stuff happened, I didn't blog much for a while and well, no SHF for me. Now I am blogging somewhat regularly - so what better way to celebrate that I've been doing more than one post in the past three weeks than to take part in Nicky & Oliver of Delicious Days' version of SHF: Can You Can?

And in fact, yes, I can can, (I can even do the cancan, but that's a whole other thing!) so this time, I chose to bottle instead. Hey, Nicky and Oliver said it was okay - at least that's how I interpreted the rules (there's a "bottle" in there somewhere, isn't there?)

Hence, I give to you: homemade rhubarb cordial. During the warm (wait, make that darn hot, as they have been here this year!) months, I drink a lot of water, as I'm told to do. I like flavoring it with cordial, and usually go for elderflower or the classic Ribena. I've never tried doing cordial myself because faced with the demand of buying sieving-contraptions and a lot of boiling when it's already hot outside, my head starts spinning. But this one was easy. No hoity-toity equipment needed, just a brief boil, a bit of sieving and a drain through some cloth, and you've got a nice, big bottle of homemade good stuff.

1 kg. rhubarb, cleansed and cut into chunks
600 g. sugar (I'll try cutting it down slightly the next time - this one was very sweet)
1 l. water

Bring everything to a boil in a non-reactive pot. Leave to simmer for 10 minutes, then turn of the heat and leave to infuse for an hour. Sieve. Drain again through a cloth, to make a nice, non-cloudy cordial. You can use the leftover rhubarb in a rhubarb trifli for instance - the compote is a little more liquid than what I usually make, but I hate wasting things, so used it will be! 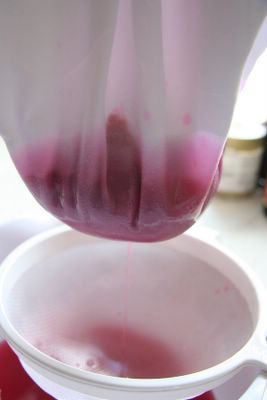 Pour into CLEAN jars - keeps for up to two weeks (mine has so far anyways) in the fridge.

When I want to drink it, I usually thin it 1:4 cordial to water, but if you like it stronger or weaker, be my guest. You could use sparkling water for thinning. I also like to spritz a little lime in it - it is a very sweet adventure, this, and the lime gives it a little oomph. 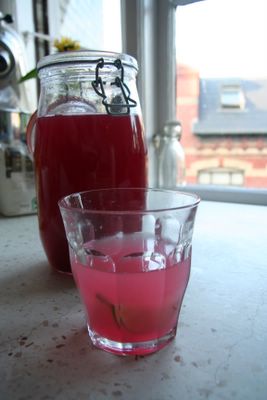 What did you can? Or did you just cancan?:-)

Anonymous said…
What a beautiful colour it is. I'd like to try a couple of jams, chutneys and sauces that feature at the back of Nigells's HTBADG. Tha cordial looks delish.

Alanna Kellogg said…
No cancan but I can can: green pepper jelly. I like the idea of the homemade cordial. Gorgeous color!
Saturday, August 26, 2006 2:34:00 PM

Anonymous said…
You can most definitely can and you can very well! What a wonderful idea to try the cordial. It looks delicious and you know what ... we have the same glasses!
Saturday, August 26, 2006 10:54:00 PM

Zarah Maria said…
Hi Caroline! I'm with you on Nigella's stuff - hey maybe we should do a project?:-)

Helen - rhubarb is a little exotic, isn't it? I mean, I know it's not per se, but it's so seldom around I'd count it as such!

Hi Alanna! Saw that one - am not big on green peppers, but your jelly looks awesome!:-)

Hi Ivonne! I have those glasses in all shapes and sizes - they're so versatile!

Hi Tanna! I love the color, too - so happy and Barbie-ish!

Hi Jen! Thank you. It was more a matter of what to do with that bunch of rhubarbs I bought when I couldn't get strawberries for the strawberry-rhubarb jam I was planning, than actual smart thinking on my part. But heck, who cares when this is the result!;-)

Thomas Østergaard said…
Hi, thanks for the look at your blog, it's great. You have a lot of interesting things that I just might have to try one day...and maybe post one of my best recipes...Looks great in here :-)
Saturday, October 21, 2006 12:38:00 AM

Anonymous said…
try putting it in ice cube trays, freezubgm and then put the cubes in a container and put back in freezer. When you pour your water, throw in an ice cube...works nice!!! And it lasts for a long time this way.
Tuesday, September 18, 2012 2:16:00 AM