Dreams of a Mexican Fiesta 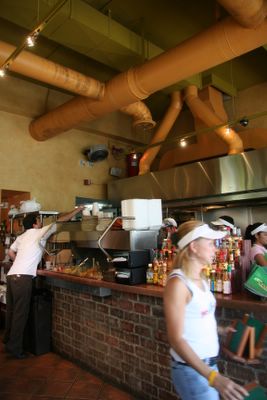 I have a hard time believing that it's been three months since we returned from our roadtrip. Where did all that time go? Where did all the time that we spend ON the trip fly away too? And why, oh WHY will it not come back??

So a couple weeks ago, I took matters into my own hands, and tried to recreate a little piece of time passed by. The Dinner Club girls (as we shall refer to them in the future) are a bunch of girls that started out in med school at the same time. Some have gone off to do other things, and the rest of us are spread out on different semesters, but we try to get together at least once a month, taking turns to be in charge of dinner and doing the dishes. We try to keep it low-key - it really should be things that we'd make for ourselves on a weeknight, without further ado. But it was summer, I had more spare time than I usually do, with school not taking up the big hunk of time it normally does, so of course, I had to throw myself at it like a kid in a candy store.

We were going to check out the pictures from the trip, so the evening already had an American feel to it. I started out thinking great, big, greasy hamburgers and shakes - but then when I, a couple days before the dinner, looked over my photos and found this one: 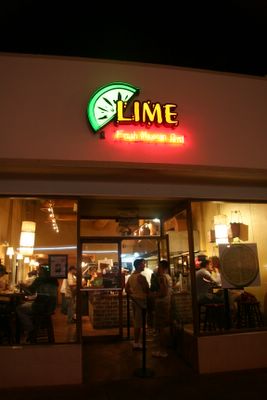 I reconsidered. Lime Fresh Mexican Grill is a little place in Miami, Florida. When I say little, I mean little - basically, what you see here is the shop - there's a medium-sized terasse to the left of the place, which seats, hmm, a 25-30 people, but mostly, it's a take-out place. How we found it? A hostess at a restaurant in one of the (very touristy places) near South Beach told us about it - we were having a look at her menu and she asked us what we were looking for, and we were all: we really want Mexican food - which they of course didn't have at her place. She then looked over her shoulder to check if her manager was around, and when she saw he wasn't, she leaned close to us and whispered: go to Lime. It's small, it's a 10-15 minute walk from here - but it's dirt cheap, the food is fantastic, you'll love it, and me and all my friends go there all the time. That sold it - she seemed so genuine that we couldn't help ourselves.

And we're glad we went. Not only did we go there that night, we came back the next day for lunch. And had we had the time, we'd have gone there to pick up some food for the flight back - unfortunately, we didn't. 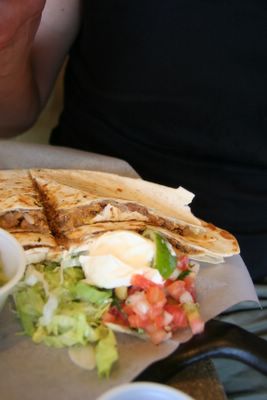 The food was fabulous, but one of the really lovely things about the place was their salsa-buffet. There was about 6 or 7 different salsas to choose from, all made from scratch, and all super fresh. You could take as many or as few as you'd like, and you could refill, and refill, and refill. Hotsauces? 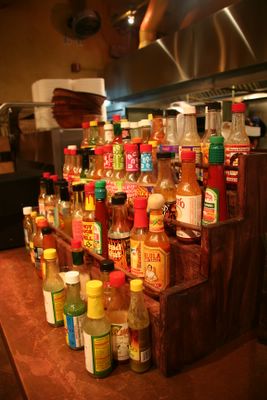 Ah MAN! It was an awesome place! My mouth was watering as I looked over the pictures, and I could almost taste everything again. I lamented the fact that food like this is nowhere to be had around here... Bo-hoo!

But hey Zarah, you're a wiz in the kitchen, aren't you?:-) So why not just make it yourself? The American-themed dinner quickly turned into a sheer Mexican fiesta - 'cause darn it, if I can't buy it, I can make it myself!

So there was salsas: 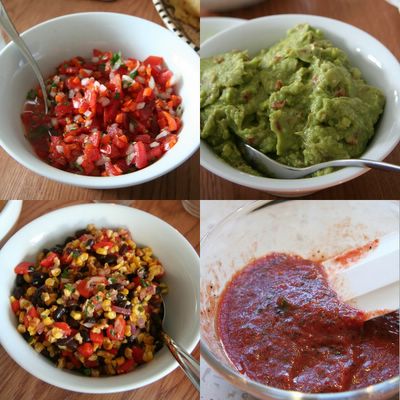 The recipes I tried was a mixture of what I found through Google and via our beloved foodblogs, combined with a dash of memory and a tad of sudden inclinations. The pico de gallo came about from this recipe. Even though I thought the orange peppers was a sort of unfit addition, I used them, and it worked well. Salsa Roja was courtesy of Saveur, only I got no where near the amount of salsa they'd promised - must have been some giant tomatoes they used! I doubled the amount of tomatoes, but not chilies - I'm still learning to eat super spicy food. Boy was it yummy! I could even do with a bit more heat, so next time...

The Roasted Corn + Black Bean Salsa was inspired by this version. I 'grilled' the corn under the grill-thingy in my oven, and that actually worked out pretty well, if I may say so myself. Easy, and tasty, and disappeared quickly. It's amazing what fresh corn does to people. I'm one of those persons that would never come close to a can of corn, but corn on the cob, or better yet, like here, cut from the cob - yes please, sir!

To go with all these goodies I sauteed some chicken with some bell peppers, garlic, red onion, a dash of smoked paprika and salt and pepper - the salsas were the important part, the chicken more of a protein requirement, so I didn't give that much thought. I will next time - not that it wasn't okay, it was just a bit - boring.

And, oh, lest I forget: homemade tortillas! 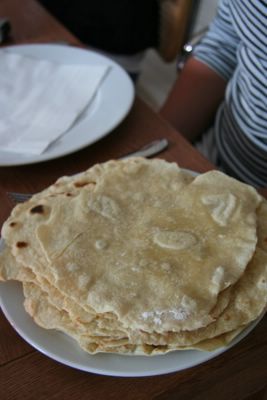 - courtesy of Molly and Brandon - except I used butter instead of shortening, 'cause face it, I ain't gonna buy a pound of shortening to use three tablespoons. And yes, homemade - the ones I can get here smell really weird once you open the pack - they're supposed to be all additive- color and everything free, but they smell - funky. And it's dead easy to make your own, I found out - I even left them proofing for way more than I was supposed too, and they didn't mind one bit. They were used for make-your-own-fajitas and: 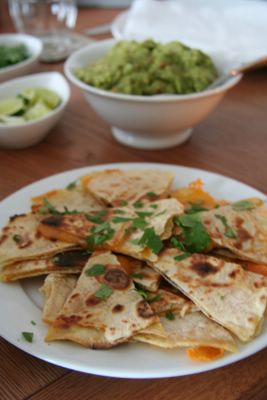 I tried writing them at Lime, wondering if they might let go of a recipe to poor little, suffering in Denmark far, far away from anything decent Mexican food-me - but unfortunately, I haven't heard from them. So if anyone's got some amazing salsa recipes - I'm especially eager to lay my hands on a smokey, tomatoey, smooth one - or if you know of any must-have Mexican cookbooks, please let me know. I know this is the "popularised" version of Mexican, and not necessarily very authentic - but eh, it tastes fabulous, and that's what matters!
The girls and I had a great time, and some great food. But the part I (almost) loved the most about it was Martin coming back from work, peeking in the fridge, spotting the leftovers and... 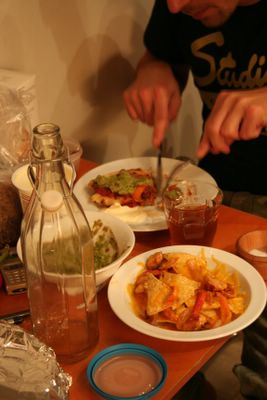 transporting himself right back to Miami with a late night snack. How could I not love this guy?
Email Post
Labels: Delicious Dinners

Cathy said…
What a feast Zarah! It all looks fantastic! The two great Mexican cookbook authors that come to mind are Diana Kennedy and Rick Bayliss. I have one of Diana Kennedy's books - I'll check for salsa recipes. Way back when I made gorditas from her book, I remember I made a tomatillo salsa of hers that was very easy and delicious... can you find tomatillos in Denmark?
Monday, September 11, 2006 4:36:00 AM

Anonymous said…
Nothing Gringo about you girl, you rock with the Mexican.
You recollected a really beautiful fantastic Festa!
I'm impressed and I'm from Texas.
But it's most impressive that your guy likes it too!
Monday, September 11, 2006 4:04:00 PM

Zarah Maria said…
Hi Cathy! It sure was a feast! I've looked through one of Rick Bayliss' books, and that looked really good! I think I would be able to get tomatillos here - the thing I have to search high and low for are the different sort of chilis, but I'll do it to get somewhat authenticity!

Hi Tanna! I'm telling you, he's still raving about it - I'll have to re-do it sometime soon, it really was lovely!

Hi J! Being desperate was what made me make all these things - there's just no decent Mexican anywhere around here either. I'd mail you some, but I'm not sure it'd keep - the postman wouldn't be able to keep his hands off, I'd imagine!;-)

Anonymous said…
Hi Zarah - everything looks so delicious, I just had a Mexican cooking session with some other food bloggers a couple of days ago, it was great and I'm sure I'll be trying some of the recipes again :)
Monday, September 25, 2006 6:40:00 PM