(Belated) IMBB#20: Has My Blog Fallen? Comté Cheese and Marjoram Soufflé - or a story of how a lot of things went awry, yet the soufflé still rose! 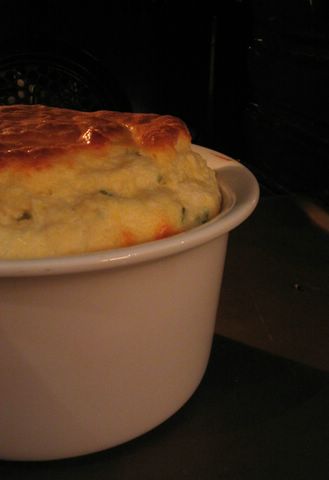 This morning sucked. They're changing the water heater in our building, so from 8.30 am this morning until Thursday around noon, we'll have no hot water. I therefore had to get up at 8 am to take a shower, even though I didn't have to go to school until 4 hours later. I like sleeping. I don't like getting up at 8 o'clock unless there's something more important than a shower for me to get up for.

But heck, then I was awake. What better to spend the time doing than check out what my industrious friends, the food bloggers, had all been up to? And behold: as you all know, there has just been a weekend chock-full of events: both SHF and IMBB! I participated in SHF, but had to see IMBB#20 run by me - I mean, there's only so much food I can eat in one weekend, and with birthday parties to attend to and work to be done, there was no fallen blogs for me.

Or so I thought. Turned out, Kitchen Chick allowed anyone that could sneak an entry in before she had done the last of her wrap-up to enter on a belated note, and still be a part of the event. Yipee! That's me! I haven't participated in IMBB for a while, but I loved this theme, so off my mind went and off my body went to school.

I returned a couple of hours later, when the light was quickly fading outside. Oh no wait, that's not true. It had been raining - POURING - down all day, so there never was any light. Damp, cold - ugh. But I had something good coming - a soufflé!

As I couldn't really be bothered to go out again and get some ingredients, I decided to use whatever I had in the fridge. A large block of comté cheese (geez, a cheese soufflé Zarah? Could you be any more original?), a couple stalks of fresh marjoram. Some leftover mascarpone, just on the verge of hopping out of the fridge itself, right down into the trash. Eggs - luckily! Now, for finding a recipe.

Delia. Oh Delia, to the rescue. Sounded easy enough, and surely I could add mascarpone somewhere here... The intro to the recipe said: The one and only secret of success in making this soufflé is to whisk the egg whites properly. Sure thing, I know that, I've listened! I've made soufflés before. Once. I'm not feeling intimidated. Yet.

I grated the cheese. I buttered the soufflé dish (slightly too large, but eh!) I melted butter for the roux...

I seperated the eggs. One eg... NO! The yolks are NOT supposed to end up in the same bowl as the whites! Stupid, stupid, stupid!

Poured out the one egg. Stood there with the dirty Kitchen Aid bowl and contemplated washing it, then remembered: no hot water. Heck, I'll just whisk 'em by hand.

Here we go again: one egg - two eggs - three eg... Sweet mama, not again!! In with the other two whites lay the third AND two lovely splotches of yolk. Hm.

No more eggs. And the rain was very much still there. What does a wise woman do? Pull out a longhandled spoon, and dig out the ill-fated yolk-splotches. Remembering her Dad saying: you'll NEVER get stiff whites if there's ANY sign of yolks in there - and the just-read paragraph. Well.

The butter had melted. I added flour, then milk. Took it of the heat. Grated in some nutmeg - and dropped the entire nut into the white sauce. Along with the grater. Really. Fingered it out, fingers covered in sauce. Oh yes, and still no warm water.

Dumped the cheese and herb into the white sauce, gave it a good stir, then added the egg yolks. Then started whipping the egg whites. It seemed okay. They got pretty stiff, with nice little peaks. I'll show them. Folded them into the cheese mixture, then hurry-hurry, transfered the lot to the soufflé dish and into the oven. Phew. Turned around to see the mustard, that I'd contemplated putting into the mixture, standing there on the counter, unused.

Thought I could just manage to do the dishes while the soufflé was in the oven - you know, old school style, with a kettle of boiled water. Started by emptying my tea sieve. Onto the floor. Missed the garbage bin by a mile or so. Doh.

I know. Things could have burned. I could have scolded myself with the warm water. I could have dropped the soufflé dish on the floor. I actually took the picture of it while it was still in the oven. At this point, I was sure that if I where to handle it at all, it would surely jump onto the floor, and disintegrate completely.

But it didn't. It had risen to a perfect height. It was golden and creamy and tall, and smelled wonderful. I took it out. I dug in - and it wasn't done yet. Close, but no cigar. I didn't care. I plated myself a spoonful, then bunged it back in the oven. Ate that one portion, then came back for seconds. And thirds. And wozza - none was left. Savory cheese, eggy-ness and a sort of (unexpected, but welcomed) peppery kick from the marjoram. Mmm.

I don't know. Maybe there's something in the air? Maybe it was all karma from reading this very funny post, to which I relate so much, this morning. Maybe it was just a tiny bit of Hybris. But most importantly, the soufflé was just the thing to soothe my day. And it rose. Beautifully. HA-HA!:-P

Preheat the oven to 190 degrees celsius.

Make a roux by melting the butter over a low heat, then add the flour and whisk well. Gradually add the milk, incorporating it well. It will look like it's curdling, but just keep adding milk, little bu little, and in the end, it will come together. Leave to simmer for 3 minutes. Remove the pan from the heat, and let cool for a couple of minutes. Add salt, pepper and a grate or three of fresh nutmeg. Stir in the grated cheese, mascarpone and marjoram. Stir in the egg yolks.

Beat the egg whites until you get a glossy mixture that stands in stiff peaks. Fold the egg whites in with the cheese mixture, starting with one tablespoonful that you incorporate fairly thoroughly, then carefully fold in the rest. Transfer to the soufflé dish, and put in the oven. Bake for 30-35 minutes (I gave mine 30 in a soufflé dish slightly larger than stipulated - I'd do 35 next time)

PS: I just went down to finish doing the dishes. And came this close to dropping the dish-gunk (you know, the stuff that always float around near the drain after you've done the dishes) on the floor. It must be something in the air. SIGH...
Email Post
Labels: Events

plum said…
Oh Zarah Maria, I Simply Could Not Stop Giggling while I read that post!! And it's so good to see that someone else gets themselves into that sort of kerfuffle!

Niki said…
What an entertaining read! Loved it! And I could so totally relate; back in January doing one of my first SHF, I had a similar experience and a similar funny post about my Engadinger nusstorte, that read like an episode of Mr Bean, just as yours does. I love reading things like this; it makes us feel so much more human and fallible!
Wednesday, October 26, 2005 12:06:00 PM

Robyn said…
It seems you had the Murphy's Law version of IMBB this time around! Only yours did turn out quite well! Nice looking souffle!
Wednesday, October 26, 2005 4:31:00 PM

Anonymous said…
I had exactly that egg experience the last time I made angel food cake, which was also the first time I made it from scratch. Scraping out bits of egg yolk: no fun. But amazingly, the egg whites whipped up into satiny peaks (why can't I have a dress that looks that good?) and the cake was fine.
Tuesday, November 01, 2005 3:19:00 PM

Anonymous said…
Zarah, What an adventure! (Sounds like me on some days -- and it's never just one "oops", it has to be a whole series of oops.) But all's well that ends well! I'm so glad I offered an extension, otherwise we'd all be one less smile (and souffle!) short.
Saturday, November 05, 2005 4:40:00 AM