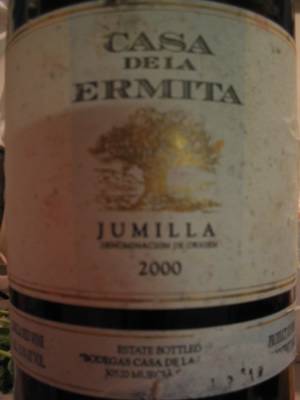 On to yet another endeavor in the world wide events - drinks some wine and drink it well! Lenn of Lenndevours spun the IMBB? and invented World Wide Wine Blogging Wednesday - he himself held first edition, and this, the second edition, is held by Alder at Vinography with a theme of Spanish Reds!

I'm usually a white wine drinker - I think I started out drinking red wine, then turned to white - and never really got back- I know it's usually the other way around, but this is how it went for me. Maybe I've just been spoiled with the really nice whites we have at work? But you have to grab the bull by it's horns...

Boyfriend recently closed down his restaurant, bringing home about 70 bottles of wine (where DO you put that in a three room apartment??!! Oh yeah, down your throat!) so we went hunting in the bottle forrest on our living room floor. There was a couple of bottles of Spanish descendants, and we settled for this one: Casa de la Ermita 2000 from Jumilla in Spain. To get the facts straight, Boyfriend seems to remember the price to be somewhere around the equivalent of $10-$12. It's a blend of tempranillo, monastrell and cabernet sauvignon and has been lying on oak for 10 months. Oh, and Jumilla is here - inland from Alicante, near Murcia.

The first bottle we opened was - okay let's just say it tasted like port! It must have gotten air or something, the color was very dark, and the smell..- well, like port. Luckily, there was another bottle of the same kind - that was more like it! Color still very dark, but the nose not at all port-y! Blackberries and vanilla, smack in your face - a bit smoky, too. The taste was rather nice as well, though there were plenty of tannins - if tannins is that feeling of your mouth drying out from the sides and inwards? Vanilla and blackberries again, even slight hint of pepper.

I found this - Heh, which actually corresponds pretty well to what I found! Their own homepage has this to say - I'll hate to disagree!

Although I found it heavy and full-bodied - definitely one that would go best with hearty dishes - I liked it. Not a summer wine, but in front of the fireplace with something cooked from a pot in the fire, it would work a treat!

I'm still learning here... The idea of teaching myself this, with the help of the blogging world does appeal to me, so I'm definitely in on the next one as well. Now, gotta go to work and drink some white wine this time ;-)