The Chefs and I, and Chicken Liver & Raspberry Salad 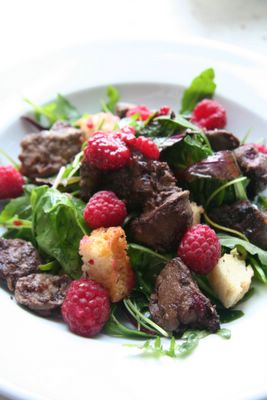 As you might know, I've been doing the working in the restaurant business as a waitress on a regular basis for the past, oh... eight years. Woo. Eight years? Has it really been that long? Time travels fast when you're having fun!

Funny thing is - I keep this food blog of mine (okay, I try!) and you people out there know just exactly how enamored I am with food and baking. Even so, I've never told anyone, on either side of the pass about Food & Thoughts existence. And I think if I was to ever tell anyone, I'd start with the waiters. Because somehow, the idea of the chefs knowing intimidates me. Like a lot.

Over the years I've met and gotten to know quite a couple of chefs. There's far between the ones I don't admire, or even adore. With them, I've taken on a role of sorts. I was - or should I say am? - the brown-haired girl with the green eyes and the glasses that, at first anyways, didn't know a whole lot about food. The difference between a glace and a jus? Eh. Hot plates for serving? Ouch! Putting plates down facing the right way? Ooops.

But I learned. I learned to ask questions. And they learned, gradually, that I actually meant it when I wanted to know things. They learned that I was sincere when I asked weird food-related questions. Why a bavarois and not just fancy jello-ish thing? How do you make your bread? They learned that I cared, on a level deeper than just satisfying the customers.

But I digress. I was saying I think it might intimidate me, that they should know how much I really like this thing that they - or some of them, at least - spend every hour they're awake thinking about. This blog and the idea that one of the guys might find it terrifies me. It's this little project of mine, but it's also very personal. Would they be slapping their thighs with laughter, point their fingers at me the next time they see me and say: watup housewife? Baked some brownies lately? Quirped about your family?

A chef I know through another chef actually dropped by a couple of months ago. A guest of his had mentioned that the reason she came to his restaurant was because I'd mentioned it briefly here. He sent me an e-mail, thanking me for the kind words. And I was petrified. Who would he tell? Did he even know it was me? I bumped into him recently - and I was ready to spring for cover. Stupid, I know - but for some reason, it felt like he had a peek into a part of my life that I didn't decide to show him.

I'm no chef. I don't claim to be. You could blindfold me and have me taste-test a hundred ingredients and I might be able to tell you what 10 of them were - if that many. But what does a good chef make? What he does, or the way he does it, his way of approaching things? Or how many ingredients he can distinguish form each other?

That's the whole point, isn't it? There's not a blueprint as to how to love or appreciate food. At least I don't think so. Even though it's at a whole other level than what the pro's do, it doesn't make it less sincere, or honest. And as I told you, I'm nothing if I'm not honest.

It's not that I need to have a sign hanging around my neck saying: look at me, look at my blog. But I certainly don't need the feeling of being ashamed either - especially because I am dead proud of what I've made here. It might not be original, it might be down-to-earth - but I enjoy it. It might not be professional cooking, but it's cooking from the heart.

And you know what? I just told one of my chef friends about this blog yesterday. He's become a friend, more than I can say of any of the other chefs I know, so I felt safe telling him - although even that was a bit of a hurdle. His comment: why haven't I ever gotten any of all of those cakes?!? I guess it ain't all bad then...:-)

Chicken Liver Salad with Raspberries - from Madjournal by Paul Cunningham - another of the chefs who has no idea what he's meant to me and the way I approach this whole food thing...

I know we're out of season with the raspberries here in the northern hemisphere, but I promise you, it's worth waiting for. If you can't wait, I was thinking you could substitute pomegranate seeds, or maybe gently defrosted frozen raspberries. I really like the contrasting flavors of slightly sweet and soft chicken liver with the tart, acidic berries. The bread croutons add a nice crunch.

For the vinaigrette:
2oo ml. extra virgin olive oil
150 ml. raspberry vinegar
250 g. fresh raspberries (or substitute frozen, I don't think these necessarily have to be fresh)
1 tablespoon sugar
Salt and pepper
- mix all of the ingredients, crushing the raspberries slightly in the process. Leave to infuse for at least a couple of hours, preferably a couple of days, in the fridge.

Start by making the bread croutons. Cut up the loaf into 1,5 cm. x 1,5 cm. cubes. Toss them with olive oil, salt and pepper and to of the crushed garlic cloves. Put into an ovenproof dish in a single layer and toast in a 200 degree warm oven for... oh, about 20 minutes? Until crunchy. You might have to toss them around every now and again, for even browning.

Then go ahead with the chicken livers. Toss them in a mixture of flour, salt and pepper, then fry in olive oil/butter with a little crushed garlic thrown in. You might have to do it in to batches. You want the livers to be nice and crisp on the outside, but still pink on the inside - that's how I want mine, anyways, you do as you please.

Toss the lettuce leaves with the vinaigrette, shallots and raspberries. Put the chicken livers and croutons on top, add a sprinkling of salt and a grind of pepper, and serve immediately.
Email Post
Labels: Certainly Salads Me. Meme. MeMe. Me

Anonymous said…
Gosh, it's been so long since I had chicken livers and they are sooo good. Raspberries and chicken livers would be very good together.
I think I understand how you feel about the chefs knowing/seeing your blog side - it really is a personal thing.
Tuesday, November 28, 2006 3:06:00 AM

Anonymous said…
I really like raspberry dressings on salad...I'm sure having fresh raspberries in a salad would be amazing but it's very hard to come by fresh here...

I know very much what you mean...I feel that way too...about it being personal and the fear of the professional world seeing it...

Sara said…
I really love this post. I find it very interesting to see who bloggers tell about thier blogs. I am one of the shy ones myself.
Wednesday, November 29, 2006 12:15:00 AM

Pille said…
Zarah- firstly, thanks for a wonderful meal (experience?) on Friday night! It was great to meet you!
The salad looks delicious - I buy chicken liver every now and again, but always end up making liver pate with brandy, which I love. Maybe I should try a salad for a change?
Re: blog - many of my colleagues know I have one, but they haven't got an address. So it's a semi-secret blog of mine:) It's my non-academic alter ego, so generally, I like to keep it a secret..
PS The Chef you told - is he the one from Friday's place? :)
Wednesday, November 29, 2006 12:28:00 PM

Anonymous said…
I love this post, Zarah. It's a perfect exemplar of your fresh, thoughtful, honest writing and thinking. And I'm definitely going to try this recipe. I love chicken livers, and I don't eat them often enough since I'm the only one in the house who likes them!
Wednesday, November 29, 2006 1:36:00 PM

Zarah Maria said…
Tanna - go for it! It's a fabulous salad. And yes, a personal thing indeed - it's become one, anyways. But that's the way I like it, so I guess it's okay!:-)

Joey - raspberries aren't so hard to come by here in the summer, but they're usually really expensive - I actually found this a nice way to stretch them a bit. And I like the idea of fruits in salads...

Pille! Thank YOU - it was great meeting you and I'm glad you had a fun time! I sure did! And no, none of the guys from Madeleines know I have a food blog - of course, when I told them I was bringing a friend from Estonia, they were a bit puzzled as to how we'd met, so I told them I kept a blog and - well, you know! But they have no idea it's a food blog, heh! Alter ego indeed!:-) Oh, liver pate with brandy - I like that too! Must make soon...

Julie - thank you! Chicken livers are not something we eat a lot here either, but we should - we actually both like them. Now I just have to teach him to eat calves liver...

Anonymous said…
Liver's good! Lamb liver tastes much better than the rest of the animal, to me at least, but the fatty meat's great in the run up to winter. The weirdest food I've eaten has to be scorpion
Saturday, December 09, 2006 4:41:00 PM