A Year of Brownies - February 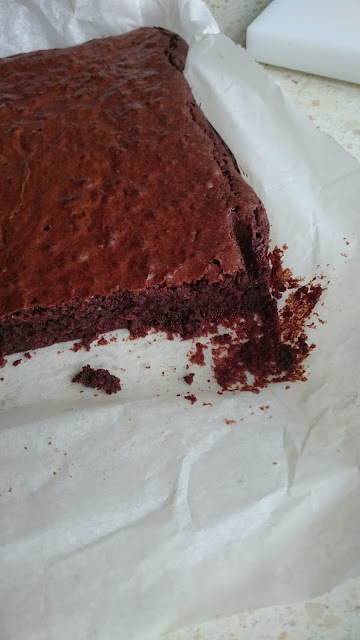 February is my birthday month, so of course, we had to have brownies for my birthday. Choosing this particular recipe for this month made a lot of sense - in it's original listing, it makes 40 brownies and uses 750 grams of chocolate! No way was I going to find myself with that much cake around ALONE. I scaled the numbers back to 8/15 (original recipe calls for 15 eggs, hence the weird conversion), and even so, we had PLENTY of cake - even some for the fridge for a couple of days later. For some reason, they state in the recipe that the cake will keep for 2-3 weeks in the fridge. Yeah, not around here.

METHOD
Procedure-wise, this recipe has you melt chocolate and butter and add that to whisked together eggs and sugar. This is slightly different from my standard method, were the sugar is dissolved with chocolate/butter, and the eggs then added afterwards. 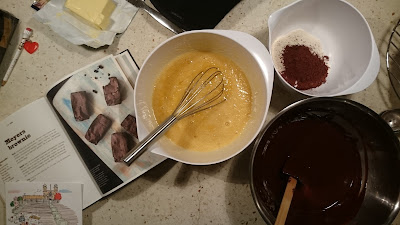 INGREDIENTS
The chocolate:egg;sugar ratio in my standard recipe is 110:2:300. The Meyer recipe has a lot less sugar, weighing in at 100:2:125. It also uses only caster sugar, whereas the standard uses a mix of brown and caster. (I use cane sugar, as that is my standby, not regular white caster sugar) Also, a lot less flour in this recipe. I should have put in chopped walnuts, but I just couldn't do it. I told you, not a big fan of bits and bobs in my brownie. 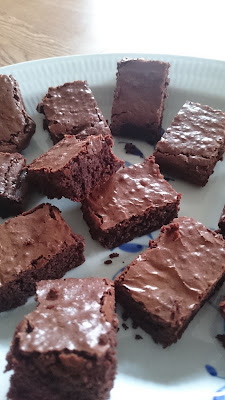 THE VERDICT:
At first mouthful, this brownie was more airy than expected, the chocolate/flour ratio in mind. I'd expected dense. Not at all. In fact, Martin deemed it a 'chocolate cake'. A good one, yes, but a chocolate cake. Not a brownie. We then proceeded to put a single piece in the fridge, and after a couple of hours had a taste. Crazy difference! Way more fudgy and dense, not nearly as fluffy or cakey. Definitely improved the overall mouthfeel to us. This brownie has a more full taste, it's very chocolate-y and dark, compared to what we're used to. Bearing in mind the lesser amount of sugar, it makes sense that we got a more full-on chocolate taste. It's not my preference, but it was a very nice brownie, that texture wise improved immensely from a rest in the fridge. 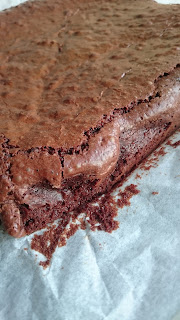 Coarsely chop the chocolate and melt it together with the butter in a bain marie.
Gently whisk together sugar and eggs - you merely want it to blend, not go airy or light. Stir the chocolate/butter mixture into the egg/sugar mixture.
Sift flour, baking powder, salt and cocoa powder into the batter, gently mixing. If using, stir in the walnuts.

Pour into the prepared baking pan and bake for about 40 minutes. Leave to cool completely in the pan, before unmoulding. Cut into 20 squares.

Email Post
Labels: A Year Of... Baking for the Sweet Tooth Chocolate. Must. Have.