A Year of Brownies - May 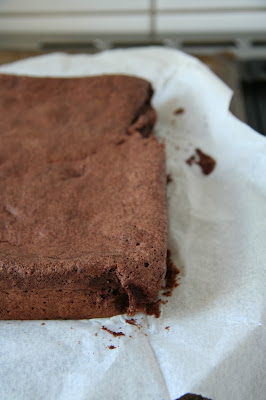 For the month of May, I'd decided to try a cakey brownie. I should probably let you know - and I guess I already have - that I much prefer my brownies fudgy, rather than cakey. But you know - science. Perhaps I was missing out, not ever trying out the cakey ones?

If anyone should know about chocolate (and hence, brownies) it oughta be The Scharffen Berger people. So I grabbed the cookbook I have from them, and found the aptly named: cakey brownie. They have other kinds, too, but this what was I needed. Here we go: 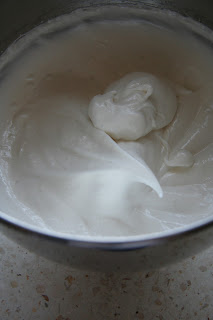 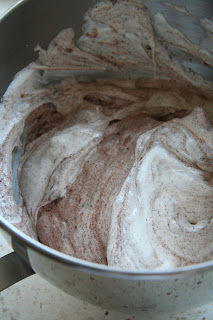 The method in this cake involved doing a meringue to start - whipping egg whites with sugar, luckily nothing with thermometers and sugar syrup! I let the trusty KA do the job, and it was no problemo. The recipe did call for the meringue to be whipped until the sugar dissolved, and while it was whicking away, I started thinking whether my sugar ever dissolves?? Not just using this method, but Im pretty sure there's always a little grit to it... I always use cane sugar - I like the caramelly taste, but it is a little coarser than regular white. Hm.

The meringue is blended with the rest of the ingredients, and produces a pillowy batter. I could almost see it souffle right there! 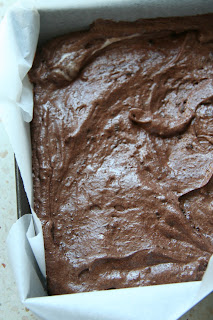 INGREDIENTS:
This brownie has cocoa powder in it, the first of the ones I've made to have that. I guess it makes sense, when you want something drier... Considerably less sugar and chocolate.

THE VERDICT:
Definitely cake-like and light, in fact so much so that I served them with creme fraiche and raspberries. (For the record, I often eat brownies out of the pan ;)) It almost souffle'ed in the oven, the fell back when I took it put. It was a lovely cake, but a cake - not a brownie. I tried chilling a few pieces, but it still never became the dense, fudgy thing I like. I'm not a convert. Peeps, we didn't even finish it. I've frozen the leftovers, and intend to crumble it into some ice cream some day, but this was a definite dud, for me. Tasty, but not my kind of brownie. But it was fun trying someting new! 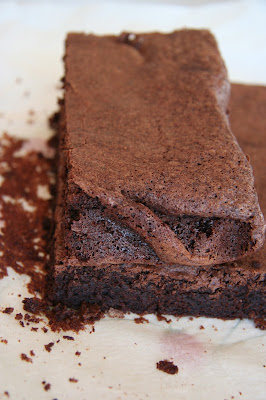 Jim Dodge's Cakey Brownie - from The Essence of Chocolate (ha! I love it how all of the books I refer to are no longer available other than used. Is this the world's way of telling me I'm old?!)

Preheat the oven to 325 Fahrenheit/170 Celsius. Butter or line your brownie pan.


Sift together the flour, cocoa and baking powder. Set aside

Melt the butter in a small heavy saucepan over medium heat. remove form the heat and add the chocolate. Let stand, stirring occasionally, until the chocolate is melted and evenly blended with the butter.

Add ½ cup of the sugar and stir until dissolved. Stir in the yolks. Pour the mixture into a medium bowl and add the dry mixture, stirring until just incorporated.

In the bowl of a stand mixer fitted with the whisk attachment, whip the whites at high speed until a loose froth with large bubbles form. While continuing to whip, gradually add the remaining ½ cup sugar in a slow, steady stream. If sugar builds up on the sides of the bowl, stop the mixer and quickly scrape down the sugar into the whites. Continue whiupping until the whites form firm peaks.

Remove the bowl from the mixer and, using a rubber spatula, fold in the chocolate mixture. Fold in the chopped nuts or chocolate, if using. Scrape into the prepared pan and smooth the top with a few strokes of the spatula. Don't spend a lot of time trying to make the top perfectly even, because that could overwork and deflate the batter.

Bake for 30-35 minutes, or until a skewer inserted in the center comes out clean. Transfer to a cooling rack and let cool completely before cutting.

I found your Brownies in a Year blog from Google's photos search. I found a unique looking Brownies here in Thailand and wonder about it recipe. So I search a thousand of brownies photos on the internet and came across your blog.

It quite look alike your meringue brownies. The reference photos are here, and here. The top was crust but not film crust like many brownies out there. There are not much crack on top, I think they were baked in individual tin and the top overflow a bit. The weight was quite light so I guess there should be lot of air pocket in it.

I would love to hear your opinion about this.