A Year of Brownies - March 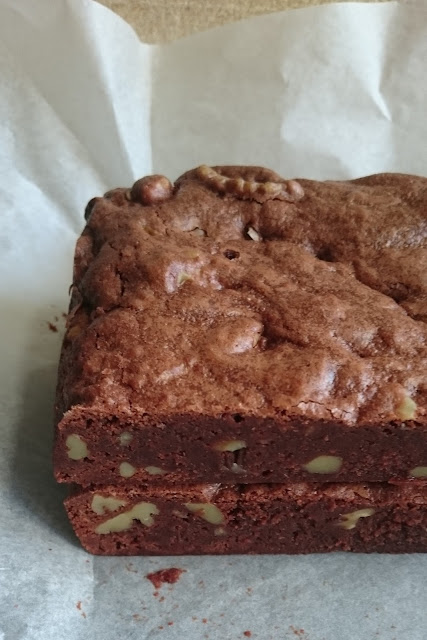 The first month of spring, and time for something new. For me, and The Year of Brownies, that meant really getting out of the comfort zone, in the form of adding something not chocolate to my brownies. Enter the walnut.

I've had bad experiences with nuts. There's nothing that can ruin a cake, bread or salad like a stale nut, and for a long time, I was the type of person that bought stockpiles of nuts, only to have them go rancid at the back of the drawer. And a bad nut will most certainly mess up the taste experience, so perhaps what I've not liked about nuts in my brownies was not so much the texture, but the (off) taste. Given time, I've learned to keep my nuts in rotation, and now buy them when I need them, so they're fresh and sweet.

There seems to be a trend towards me posting at the very end of the month, but I promise, these were baked on March 31st (hence the back-dating of the post). Nothing like a deadline, eh?

METHOD:
Slightly different from my standard, but similar to February's version - you beat egg and sugar together, then add that to melted butter+chocolate, and finally add flour and nuts. 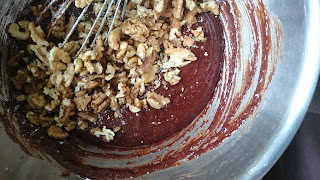 THE VERDICT:
I was very pleasently surprised by this brownie? These brownies? Terminology, people? Either way, pleasently surprised indeed. I'd read reviews around that they were dry and dull, but that was not the case in my version at all. Squidgy and yet cakey at the same time, the texture was just about perfect; ever so slightly crumbly, yet moist. Not to sweet, the chocolate and sugar very well balanced, whereas Meyer's recipe was just a bit too dark in taste for me to really love them. Texture wise, these may benefit from a couple of hours in the fridge? I have a small piece left that I'll try and put in there to see...

And you know, I liked the walnuts! For both texture AND taste. I'm looking forward to trying the recipe without the walnuts, I think I have to, to compare properly with The Standard, but I do think I have a new favorite. 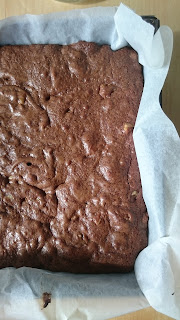 Brownies
- from How to Be A Domestic Goddess by Nigella Lawson, scaled down to ½ portion.
185 grams butter (she calls for soft, but you're going to melt it anyways, so...)
185 best-quality dark chocolate (I used Guanaja 70% from Valrhona)
3 large eggs
½ tablespoon vanilla extract
250 grams caster sugar
112 grams flour (plain)
½ teaspoon salt
150 grams chopped walnuts

Preheat the oven to 180 degress Celcius. Line your brownie pan - I use baking parchment.
Melt the butter and chocolate together in a large heavy-based pan. (Use a large one, because then you can use it for mixing the batter in - you know, less dishes to do afterwards.)
I a bowl or large wide-mouthed measuring jug, beat the eggs with the sugar and vanilla extract. Measure the flour into another bowl and add the salt.
When the chocolate mixture has melted, let it cool a bit before beating in the eggs and sugar, then the nuts and flour. Beat to combine smoothly and then scrape out of the saucepan into the lined pan.
Bake for 25 minutes. When it's ready, the top should be adried to a plaer brown speckle, but the middle still dark and dense and gooey. Keep checking on them, while they bake - the difference between gungy brownies and dry brownies is only a few minutes; remeber that they will continue to cook as they cool.

Makes a maximum of 24 brownies.


Email Post
Labels: A Year Of... Baking for the Sweet Tooth Chocolate. Must. Have.